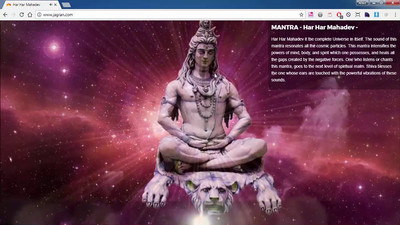 Dr. Vijay Nath Mishra, who studies neurology at Benares Hindu University Medical Research Institute, suffered a heart attack on "pornography poisoning" spread among Indians, and with application developer Ankit Srivastava an application that can be used with smartphone and PC "Har Har Mahadev" released in November 2017. We are upgrading the application periodically as of 2018 as well. "Har Har Mahadev" is a Sanskrit word meaning "Shiva, Shiva, Great God". According to Dr. Mishra, in Hinduism it is said that the god Shiva, who is responsible for destruction and rebirth, wished to destroy all evils.

When trying to access a pornographic site with a smartphone or PC that installed "Har Har Mahadev", they are redirected to Hindu saints, mantras and speech by great people such as Rabindranath · Tagore , Mahatma · Gandhi , Nelson · Mandela And that. The following movie is an example of a movie played by a terminal actually redirected by "Har Har Mahadev".


Apparently there are about 3800 harmful sites on the blacklist of the application, which includes not only pornographic sites but also harmful sites such as " blue whale " that drives boys and girls to commit suicide. Also, since you can edit blacklists yourself, even those who disappear from Twitter or YouTube during work or working, by registering the URL, corrects the habit of sabotage by a majestic prayer to Shiva It is possible. Dr. Mishra commented that this application will be "spontaneously" downloaded. In addition, "We plan to be able to comfortably use members of all religions in the future, including songs and prayer content for Muslim communities," he said.