I tried playing a neurological weakening card game 'Watanabe is only nabe' in which 24 types of 'Watanabe' such as 'Watanabe' and 'Watanabe' collapse in Gestaltzerfall. Nervous weakness using 24 kinds of 'nabe' kanji cards that exist in Japan is ' the world that crosses is only nabe '. The rule is the same as normal memory weakness, 'If you flip two cards and the pattern is the same, you get that card, and the person who got the most total number wins', but 'The world that crosses is only nabe' There are 24 types of 'nabe' cards used in, 'Even if you turn over two cards, you don't know if those two are the same' nabe '!' 'What kind of' nabe 'was the' nabe 'that you just turned over? It's an extreme difficulty level, 'How should I memorize it !?' While thinking, 'Why did the Japanese create such a'nabe'in history?', I actually played in the editorial department.

The world that crosses is just a pan | ArclightGames Official

The package of 'The world that crosses is just a pan' looks like this. It supports 5 languages, Japanese, English, German, French and Spanish, and the estimated play time is 10 to 30 minutes, the number of players is 1 to 8, and the target age is 6 years old and over. There was a bundle of cards in the box. The 'rule card' contains basic rules in each language ... In addition to the normal rules, the Japanese version of the rule card has various ways to play. The normal rule of 'The world that crosses is only nabe' is the same as 'Neurasthenia'. The rule is, 'The more cards you get when you run out of cards, the better.' 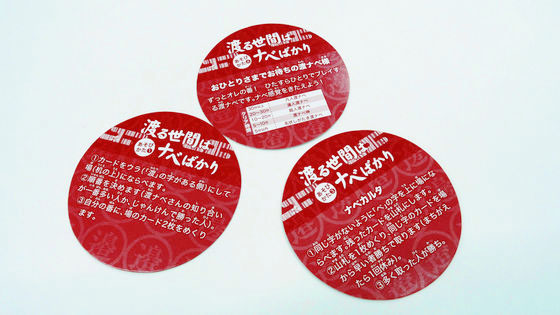 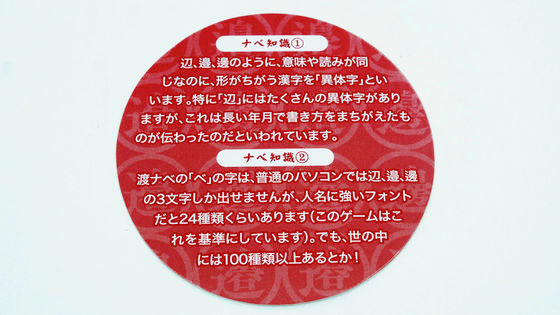 The 'Watanabe Card' looks like this. There are 24 types of 'be' in a set of 2 sheets, and 48 sheets are included. 'Be' other than the character 'side' causes Gestaltzerfall and all can be seen together. That's why I actually played. It is said that the number of players is 1 to 8, so this time I decided to play with 3 people. First, turn all the Watanabe cards inside out and mix well. When I put them side by side, it looks like this. According to the rule card, the order is decided by 'starting from the person who has the most acquaintances with Mr. Watanabe', so we decided to start with the editorial staff who are acquainted with Mr. Watanabe. 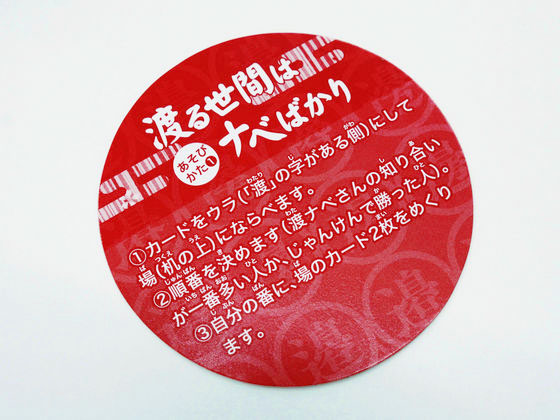 It's a simple rule to turn over two sheets and see if they have the same character, but when I actually play it, I get the feeling that 'Oh ... this is the same ... not!' In an unusual situation where I couldn't even remember the 'be' that I turned over, the editorial staff who participated leaked a heartbreaking cry, 'What should I do ...'. 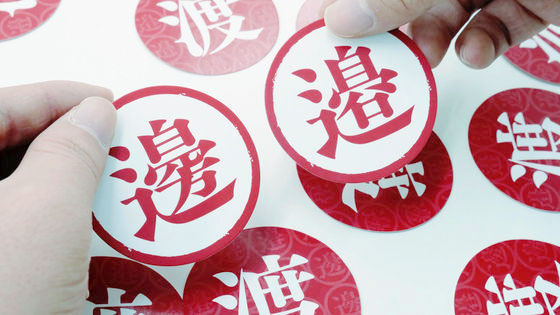 Only this 'side' card was conspicuous, and all the participants said, 'I remember only the position of the' side '.' The first card geter finally appeared in the 9th round. There was a relief mood among the other participants, saying, 'Someone finally took it ...'. 'If the two flipped cards have the same character, get those two cards and flip two more with a reward', so when the editorial staff A who got the card flips over the next card, it is a 'side' The card. Editorial staff A did not miss this luck and also got the 'side' card and got two sets of cards. Editorial staff A turned over the card as it was, but the third time was not aligned and the turn moved to the next person. From the 9th round, when two sets of cards were collected at once, there was a turn in which no one could arrange the cards. When returning the wrong card to the field because 'it's not good as it is ...', I decided to classify the place to put it according to the shape of the character. This strategy to change the location is also described in the rule card, and it seems that it is rather recommended. By classifying, the editorial staff's 'pot feeling' has been trained, so that you can get cards one after another. Editorial staff C got the Watanabe card for 4 consecutive times and led at a stretch. After the game was over, the Watanabe cards that each editorial staff finally got were like this. 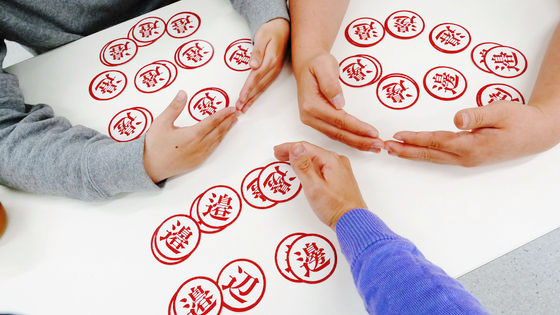 When I actually play 'The world that crosses is only nabe', I am confused because all the letters 'be' are seen together at the beginning, but in the second half, the moment I see two letters 'be', 'this is The nabe sensation has developed so much that I can understand that it is different. However, it is still difficult to remember which Watanabe card is placed where, and it seems that the key to playing is to cooperate and classify and place the card. When the number of cards decreases at the end of the game, memory is tested as well as memory weakness, so memorization is important. Some editorial staff boast that 'I'm confident in the characters of Watanabe' and 'I can write without looking anymore.'

You can also play 'Nabe Bakari Kanji' by yourself. In solo play, one person competes for the time to complete all the cards, and if the clearing time is 5 minutes or less, the rank is decided according to the clearing time, such as 'Nameless Watanabe', and if it is 30 minutes or more, 'Mediocre Watanabe'. It is said that there is. When I actually played alone, the result was 9 minutes 14 seconds, which was the rank of 'Watanabe God'. You can purchase 'Nabe Bakari Kanji'

from Amazon.co.jp for 1080 yen including tax.