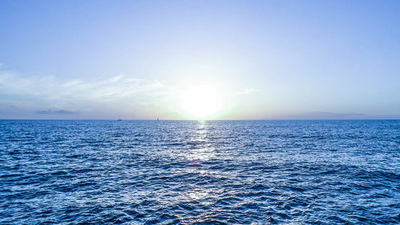 Ben Lecomte, a 51-year-old Frenchman, started a Pacific Challenge to swim from Chiba-Choshi's coast of Japan on June 5, 2018 and swim to San Francisco on 5 June 2018. Leconte has succeeded in swimming across the Atlantic in 1998 and will challenge for long-distance swimming for the first time in 20 years.


During the challenge, Mr. Le Conant lives at a boat "Discover" all the time accompanying at all times, gets up at 6 o'clock every morning and takes nutritious meals such as bacon, bread and protein shake every morning. Then I jumped into the Pacific Ocean from where I finished swimming the day before and I will start swimming towards the east aiming for San Francisco again. It consumes a lot of energy during the challenge period, so he seems to have dinner at 8000 kcal every day.

This is why Leconto initiated the cross-Pacific challenge because I thought that people wanted interest in environmental issues. "I have noticed that the amount of plastic garbage launched on the beach has been increasing rapidly in the last 30 years, and this time it's a challenge that we are going to get to the sea more than 1000 miles (about 1,600 km) from the coast I was surprised to see plastic garbage floating, "Lecontt said on board the Discover. While swimming, Mr. Le Conant occasionally took a rest and drank nutrition supply soup or drink water on board the discover. The team supporting Leconto records the exact position by GPS every time, and after leaving or on the next day, Mr. Le Conant is beginning to swim from where he left off. Since starting the coast of Japan in June, Mr. Le Conte is already swimming more than 2000 km. As Ruconte swims, the Discover staff collect samples of plastic garbage that can be picked up at sea level. Even though you are swimming in the middle of the Pacific Ocean which is more than 1000 km away from the coast, you can see that there are as many as 2 large plastic waste drifting over the surface in 5 minutes, and colorful lint-like microplastic is 1 I heard that we can see about 4 per minute.


Mr. Ruconte says that it is very fun to swim fish in the immediate vicinity of Mr. Ruconte while sometimes swimming against the stomach while swimming. However, during such fun, when you look at the plastic garbage that floated around you, you feel that you are being pleased with water. "We can see that net whales are floating near whales and fish swimming, but it is dangerous if the net hits the marine life," Ruconte says. Plastic contamination spreads from the land towards the sea, fragments of PET bottles crush and become microplastic and drift between waves. Research shows that a total of 8 million tons of plastic is dumped into the ocean during the year, and it seems that the amount is increasing every year.

Many marine organisms and birds are damaged by plastic contamination, and everything is being polluted, including microplastic found not only in the body of living organisms but also from the salt that humans can eat. Mr. Ricon considers that he must pass through the huge "microplastic vortex" floating in the ocean of about 1,800 km from the coast of California. "In order to stop pollution, people living in the land must change their behavior and habits, which is not an easy thing, but pollution by humans will have a major impact on the environment," Ruconte I am telling you.

In addition, on Le Conte's website you can check the current position where Mr. Le Conte is swimming in real time.