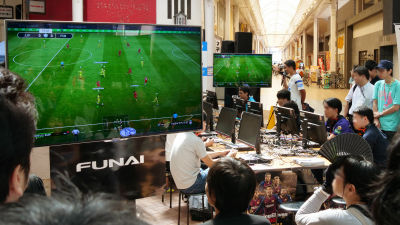 An e-sports event " Japan's first e-sports on physical education! " Which uses the latest work "Weenele" series of football games " Winning Eleven 2019 " to play against eleven vs. eleven players like real soccer . 11 players vs. 11 players playing football games in Tokushima and Tokyo "was held at the venue of Machi ★ Asobi vol.21 . Since general participation + professional athletes got mixed up and played against each other, it was a gorgeous event for professional soccer leaders to explain, so I was wondering what kind of excitement the venue will show I have made sure.

The event began at 11 o'clock on the 8th of October, but the set-up force was working hard from the night before the setting. Just before the event, the staff played 11 pairs of 11 battle as a demonstration as an event. Although it was a demonstration to the last, a lot of people gathered at the venue like "Nanda is?!" Every time players attracted or scored by dribbling, big applause came from the venue. A chair was prepared at the venue, but it was too much to sit. People who are not interested in e-sports and Wi-Fi usually seem to have gathered together, and watching e sports together with young people until the elderly. That's why the event started. Mr. Maika Takai with a voice actor with experience of football will be able to explain the moderator and the explanation of the game ...... Mr. Ryuji Tsugei, a professional leader with a JFA official A grade license who is active as a leader at the professional football club · Tokushima Voltis belonging to the J-League. When Tsuge-san gave greetings, the core fans dressed in the uniform of Tokushima Voltis held a towel muffler. In addition, at the time of article creation, as a sports player born in Tokushima Prefecture as the only e-sports player, the winning eleven 2018 Japan e-sports license professional wiile player who has " license " player Similarly, "Masa Chuu" player who is a professional Witoile player Also SOFIA (Naoki Sugimura) who won the gold medal in the "e Winning Eleven 2018" category of e sports adopted for the demonstration competition of the Asian Games appeared. 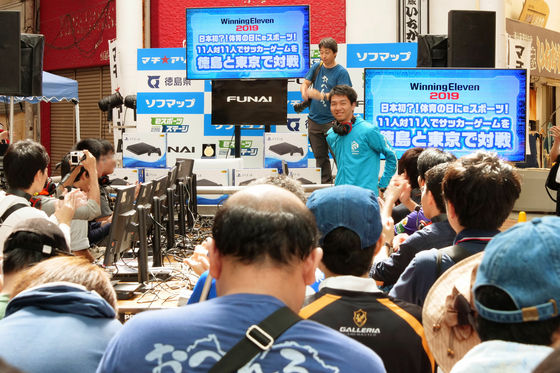 He brought me a gold medal of glory at the venue. The 11 vs. eleven players will be played by eleven players at the Tokushima venue 11 vs. Tokyo venue. At the Tokushima venue, players, Masayuki players, SOFIA players, three professional players and eight general participants teamed up, and at the Tokyo venue Leba (Aihara Tsubasa) who won the gold medal at the Asian Games with SOFIA athletes 3 professional players led by leaders + 8 regular participants are teaming up. The "number of people" portion of the game screen is "22 people", and you can see well that a battle is played with eleven players and eleven players who are the same as real football. 22 players are listed as "esAKIBA" in the Tokyo venue and "MACHIASOBI" in the Tokushima venue. The Tokyo team uses the English ancestry · Liverpool, the Tokushima team uses Barcelona led by Messi who is the world's best player. Participants are supposed to decide athletes to operate at random, and in the first game SOFIA players Tear · Steegen of GK, players CB PICKET, Masatuyu player handles FW's Suarez did. That's why I kicked off. Tsuge-san who explains the explanation also seemed to play the heiress after a long time, the graphic has evolved much more than when he was playing, the technique which can be used at the time of operation also increased, and I was surprised that the evolution is greatly That's right. Until the game begins, 11 people with controllers are lined up in front of the monitor, which looks like a game that looks like a game too, but as the match begins, you will watch the game on the monitor with the video, It will be the same feeling as watching football matches at sports bars and the like. Even though it is a game, indeed it is as good as watching realistic sports from the side I am watching, I realized why competing games played in competition format are called "e sports". As the game started, people fell into the "feeling like watching ordinary sports", so people passing by the event venue stopped one after another and the venue was indeed filled. Maybe some people watched the monitor thought that it was not a game but watching sports. 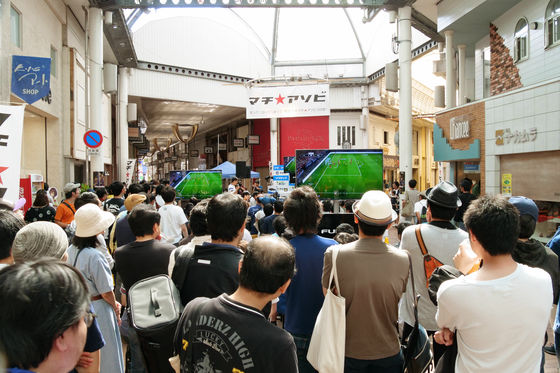 As well as sports, if good play in the game jumps out, applause will be rolled from the venue. Good luck by SOFIA glows, and the game goes 0 to 0 even if it enters the second half. The Tokushima team gains chances. There is also a scene in which GK operated by SOFIA player scores to score beforehand and there is also a scene where it jumps before the opponent goal, and it may be unique in the game that free play which can not be bound by the position is possible. 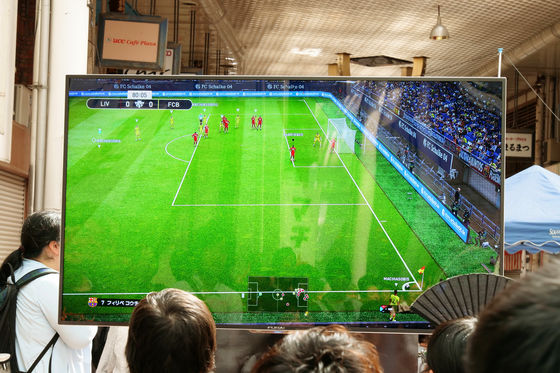 Eventually the first game ends with 0 vs. 0. Although there was no score scene, the venue got excited much with brilliant dribbling and defensive defense with body. Also, from the venue, similar voices are raised as when watching realistic soccer such as "cross cross", "too many people gathering!" "Ball overdoing!", And the actual editorial staff There was a moment when I forgot to take a picture and it became hot to support the Tokushima team. Man of the Match was Tear · Steegen of SOFIA player who was active in defense as GK. A big cheer is also raised from the venue to play showing GK and professional athletes' differences. That's why the first game is over. Multiple games will be held thereafter changing general participants. In addition, "Soccer game against Tokushima and Tokyo in 11 eleven vs. eleven players on the day of physical education! E-Sports!" Sofmap is on-line distribution, eSports Studio AKIBA powered by SOFMAP LIVE delivery page I watched it with.