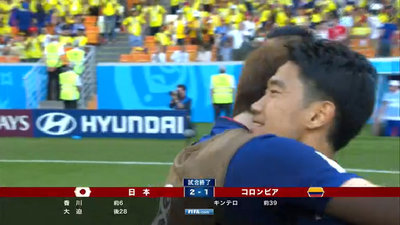 Collaboration MF Carlos Sanchez who got the opportunity of the game just after the game started to prevent the shot with his arms will be issued a red card. Makashi Kagawa decided exactly the PK obtained by this foul play early.

However, it was pushed by the Colombian attack that was reduced to 10 people, and it was decided the FK given by the foul and equalized.

The game returned to the launch, Japan launched Keisuke Honda instead of Kagawa in the second half. When Yoshiya Osaku combines his head with FK from Honda and took a winning point, he defended this one point and has won the World Cup victory since the 2010 Games.