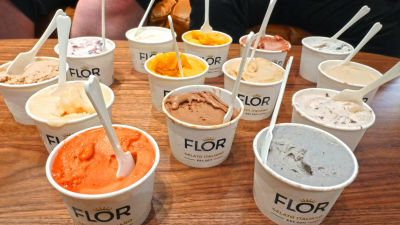 The first Japanese shop of gelato specialty shop " FLOR " with head office in Italy opened on Friday, August 24, 2018. FLOR handmade handmade gelato using fine natural materials gathered from all over the world. I went to FLOR and enjoyed various gelato to see what kind of taste I can actually enjoy.

There were various types of gelato lined with slurry in the showcase. According to a clerk, this lineup changes according to the day and time zone, and when there are many, about 20 kinds are arranged at the same time.

This time, we ordered all 15 types of gelato that were in the showcase at the timing of arrival at the store. This time we ordered with "Singoro" (350 yen tax included) in which 15 kinds of gelato was included in the cup. Compared to iPhone 7, the size of the cup looks like this. It was about the same size as general cup ice. I will eat it at once. One item is Ichigo. 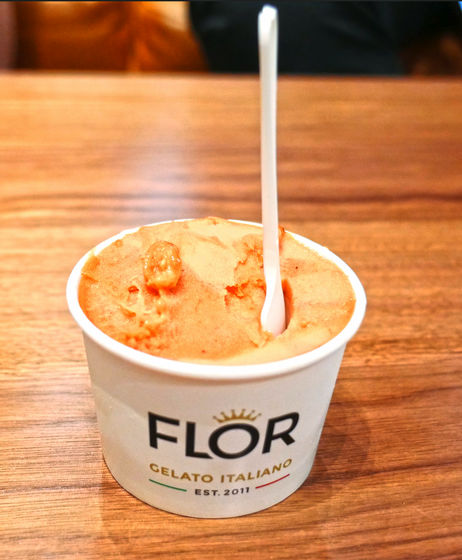 When approaching, it smells strawberries faintly. When you put it in your mouth, the scent of strawberries spreads in your mouth. It was almost impossible to feel acidity with rich sweetness, as if you feel like eating strawberry jam. There are seeds of strawberry in gelato, and you can enjoy the conflicting texture. The second item is nutty cereal. 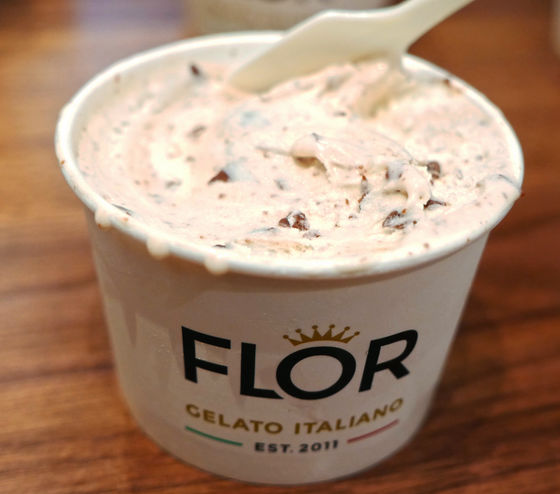 When eating, the fragrance of chocolate spreads in the mouth, and you can enjoy a change in texture with creaminess of gelato and crispy texture of hazelnut and chocolate-coated cereal contained in it. 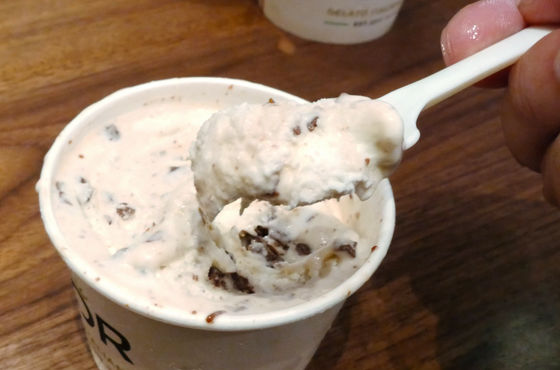 Three items are yogurt. When you put it in your mouth, you can feel the smell of milk strongly. The slight acidic taste of yoghurt was slightly felt, and it was the impression of milk series gelato. 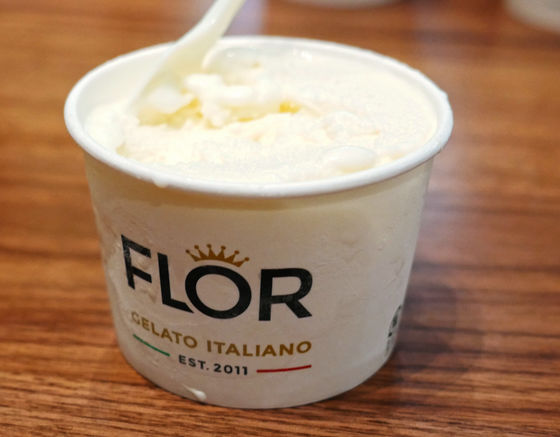 Four items are tiramisu. When you put it in your mouth, the scent of cocoa powder spreads throughout your mouth, and you can feel a slight sweetness of custard sauce immediately after that. It was sweetness moderate and it was a feeling like gelato for adults. Five items, Crocan Nino Cherry, is a gelato with nuts and cherry fruits inside. The scent of cherry spreads to the mouth full of mouth. The nuts contained in it were not crispy, finished in a slightly moistened feeling and the texture when burned was enough to make you feel as if you were eating authentic cherries. The six items are "cream of Marco's grandmother's house made with eggs, milk and lemon." When I tried it I felt the smoothness of the cream, but it was as smooth as I felt as if I were eating a gelato of lemon water. I imagined a celadon creamy gelato from the appearance, but I am amazed at the gap with the appearance. 7 items are Oreo. When you put it in your mouth it is very creamy and you can feel the smell of milk. Gelato contained crushed oleos and enjoyed a change with the crisp texture of Oreo. Another editorial staff asked me to eat it, "It looks like McFleurry, but Oreo is moist, so this one has a sense of unity and likes it". 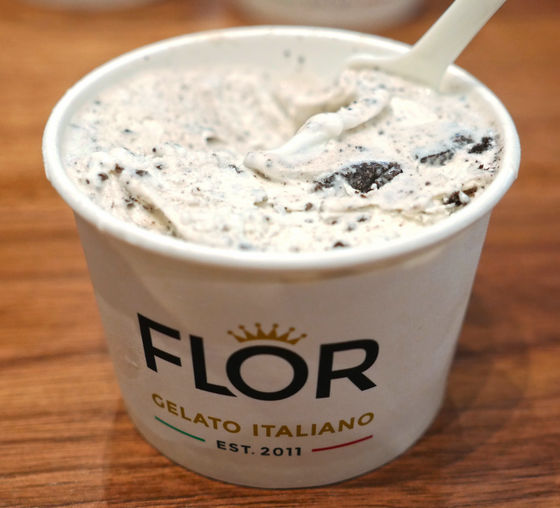 Eight items are milk chocolate. When eating, the scent of Italian chocolate with richness spreads throughout the mouth. I felt like I was eating a rich and thick chocolate, and it became an irresistible taste for chocolate lovers. Coffee, which is 10 items, features a smooth texture compared to other gelato. The coffee was slightly bitterly seasoned, but since milk is contained in gelato, I could feel the casual aroma taste like cafe au lait. 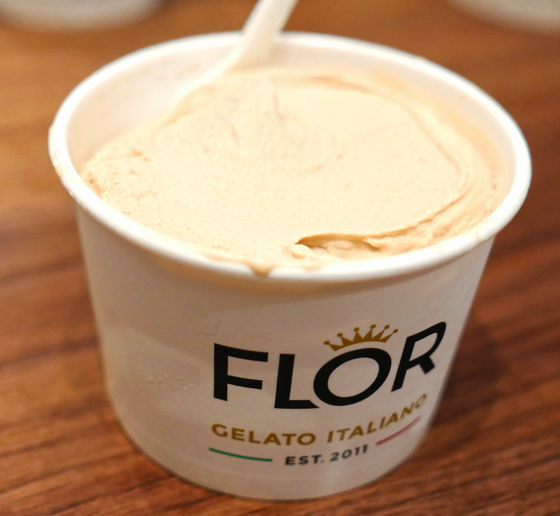 11 items are pears. When eating, the fragrance of pear spreads throughout the mouth. Although the texture has creaminess peculiar to gelato, it received a very refreshing impression with the delicious flavor of pear. 12 items are mango. When you put it in your mouth, you can feel a rich flavor as if you had just grilled the mango. Mix berries of 13 items contain raspberry, cassis and so on, you can feel thick sweetness and sourness. I was impressed with the texture of the texture, I received the impression that flesh and seeds were kneaded in gelato a lot. 14 items are passion fruits. The fragrance of passion fruit has drifted even before eating, and the taste is too thick to beat it. When I had another editorial staff eat it, there was an opinion that "It feels like passion fruit sorbet is strong". 15 items are black sesame. When I tried it, I can feel the taste of a very thick black sesame. In addition, milk was also mixed, and the sesame peculiar flavor and milk were common. 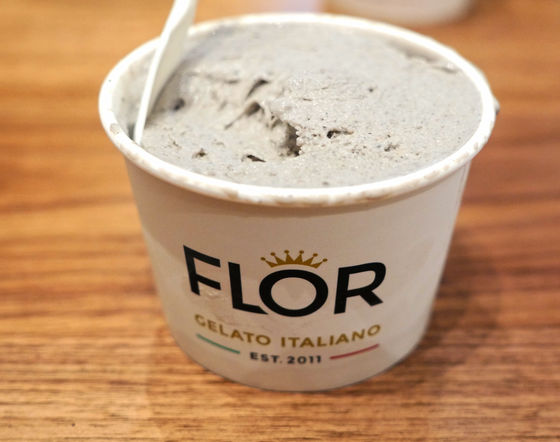 In addition, gelato can be ordered by shaking (640 yen including tax). This time I tried shaking "Black sesame" that we ate for 15 items. 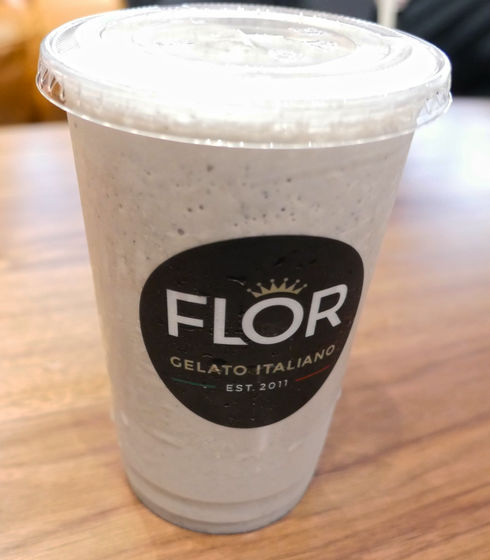 The size of the container when shaken is the same as the iPhone 7 tall size. 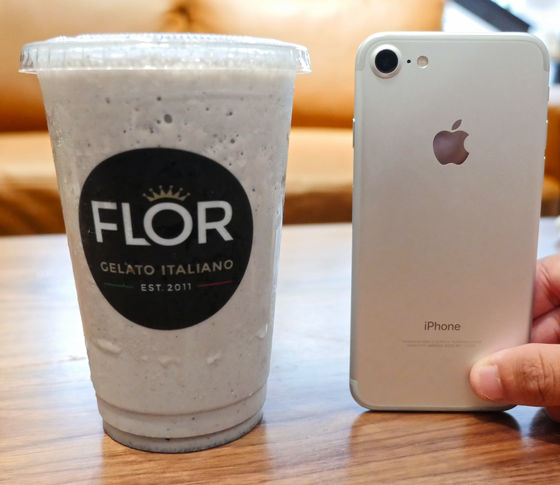 As I drank it, the flavor of milk got thinner and the feeling of black sesame stood out. When other editorial staff also drank it, there are many opinions that "it is a bit of a failure to make a black sesame a shake ... ...." This time I tried shaking black sesame experimentally, but it seems that fruit flavors will not fail if it is shake.