How was the fictitious 'alien language character' appearing in the game designed? 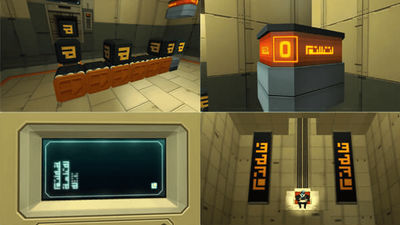 As a prisoner of aliens, the " Infinifactory " game in which the factory is assembled and the product is produced as instructed, " letters representing the language the alien is using " appears in various places. Zach Bath, chief designer and founder of Zachtronics who developed "Infinifactory", explained how this alien character was designed.

The game "Infinifactory" which assembles a factory as it is ordered by the alien to produce a variety of products is written in machines and buildings appearing in the game aliens. The alien character is not an important thing related to the content of the game, it is only one of the props for directing the world view, but if I spent most of the development of "Infinifactory" on the design of this character Bath says. 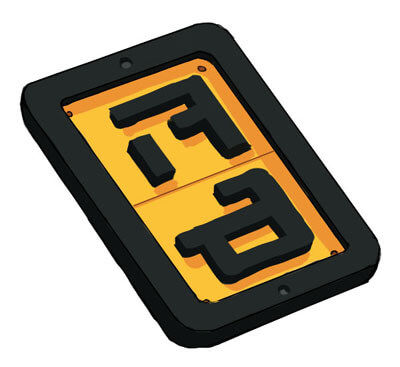 Mr. Bath designed a letter like a block based on a 5 × 5 grid, modeling kanji used in Chinese and Japanese when designing alien characters. According to Mr. Bath, I imagined kanji meaning not only horizontal writing but also vertical writing. Moreover, "Design with straight line" which can be expressed by connecting letters and letters seems to have referred to the character used in India · Devanagari .

After thinking about the basic concept of letters, Mr. Bath created "document (document)" expressing a fictitious sentence. In addition, Mr. Bath focused on the English rule "to always capitalize at the beginning of the sentence, end the sentence with a period and delimit the sentence" "break the word with a space".

Mr. Bath first sandwiches multiple alien characters between two kinds of specific characters called "start character" and "end character" so that not only the characters are enumerated but "sentences" meaning are written I felt as if it was. In addition, we designed multiple words to form a "word" by connecting straight lines and placing a specific letter at the beginning like an English article. Mr. Birth says that there is an intention to show the sentences and words concepts as designs in accordance with one grammar, which included in the design. 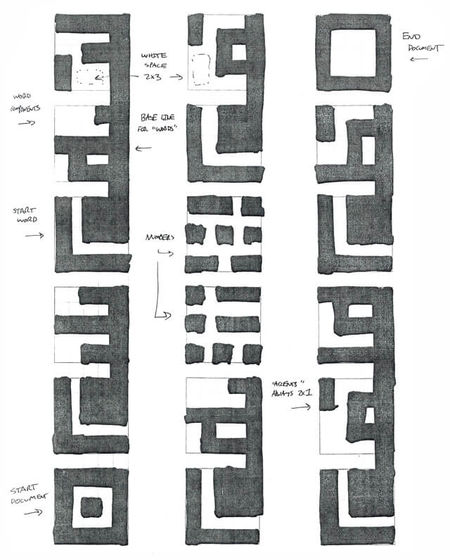 After creating the document, Mr. Bath created a PC font called "overload". In addition to the alphabet, this font corresponding to periods, blanks, and numbers is rotated 90 degrees after typing in Adobe Photoshop , so that it becomes a vertically written sentence as it is. By using "overload", development staff other than Mr. Bath can easily create text of "alien language", which means that development efficiency has improved. 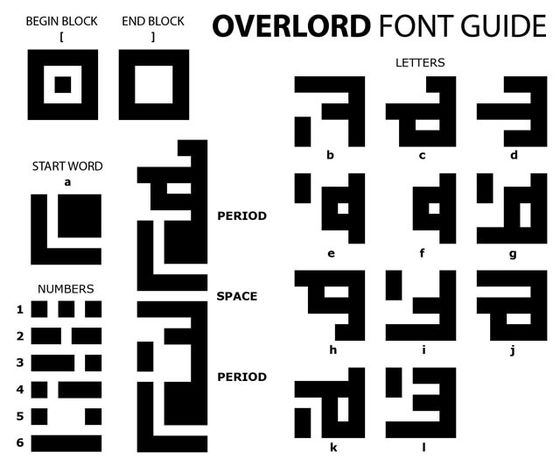 The alien language text thus created was placed on the screen of the computer and the empty space on the wall. Since alien language text was actively used in the video and demo versions released before the release, enthusiastic fans thought that this alien language text should have something important, and decipher it somehow It seems he was doing. Mr. Birth says that I am sorry for designing only the language as it really is, because I did not make the series of alien language texts particularly meaningful, but I had the opportunity to make a sequel Now he says that he wants to give meaning to fictitious text.