What is another meaning in 'peace mark' that represents nuclear disarmament? 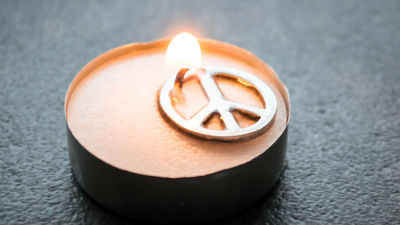 Peace mark means "Nuclear Disarmament" and it has been used as a symbol of peace movement and antiwar movement. According to Gerald Hortman who designed this symbol, it seems that he had put another meaning in this mark, but he said that there was hardly anything actually used. What is another meaning, CNN is approaching its meaning.

A brief history of the peace symbol - CNN Style
https://edition.cnn.com/style/article/style-origins-peace-symbol/index.html

When the United States and the Soviet Union pursued nuclear development and was in the midst of nuclear weapons development competition , England entered the development competition in 1952. In 1957, many British citizens began to rebound against repeated British nuclear tests, establishing a nuclear disarmament campaign , an anti-nuclear movement group. In 1958 the following year, the organization carried out protest activities. At this time, the mark that the nuclear disarmament campaign raised was "Peacemark".

The piece mark is designed with the letters "N" and "D" of the hand flag signal overlaid, "N" means "Nuclear (nuclear)", "D" stands for "disarmament (disarmament)" , It is appealing for "nuclear disarmament". 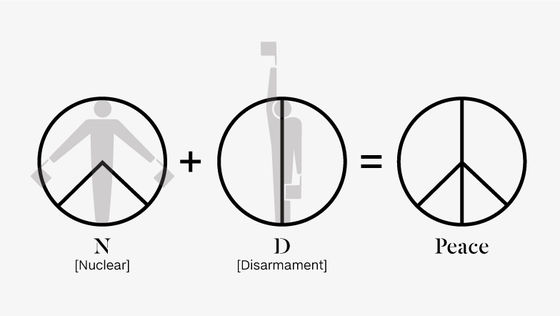 Mr. Ken Colzban, familiar with the history of this mark, acknowledges the simplicity of design, "It's a very powerful design that can be drawn even for 5-year old children and to attract people." He said that after the Peace Mark was used in a nuclear disarmament campaign, he began using this mark in protests around the world.

However, when a piece mark was used all over the world, it was not a "nuclear disarmament" in its original meaning, but as a protest movement of the Vietnam war in the United States, it was a symbol mark of antiwar movement and peace movement . Mr. Colsban says, "Most people did not know that it meant nuclear disarmament, because some people had marked the Mercedes-Benz mark." According to Mr. Colsban, "Mr. Holtre liked the upside-down version of the peace mark," Peace Mark has another meaning when turned upside down. When the mark is turned upside down, the letter "D" of the war flag signal changes to "U" and it means "Unilateral Disarmament" (unilateral disarmament). In other words, the piece mark designed by Mr. Holt had not only nuclear disarmament but also really wished for "peace" and "anti-war". However, because the impression of the peace mark meaning nuclear disarmament was too strong, the "upside-down version of the piece mark" intended for the peace movement seems to have rarely been used.