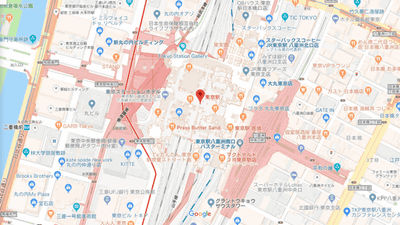 In Google Maps, the price structure of API has been changed since June 11, 2018, and there are patterns where the financial burden is greatly increased in some net services with large usage of Google Maps. About the substitute online map as evacuation destination of such "Google Maps refugee", startup company " In Der Apotheke " is compiled.

In Der Apotheke is developing a service that allows users to search for nearby pharmacies online and receive the necessary medicines. Although it is necessary to use online map from the nature of service, it seems that we considered switching to another online map by raising price of Google map.

In Der Apotheke says, 'Google is raising the map's use price by 14 times, reducing the range available for free to 1 / 30th, making it an industry of 1 billion dollars (about 110 billion yen)' We also condemn the fact that the period from notification of change of usage fee to implementation is short and confusing many startups.

So far In Der Apotheke has used Google Maps for free use (API calls of up to 750,000 times per month), he said that he did not apply for commercial use from the viewpoint of profitability. However, due to the change in the price system in June 2018, Google received mail from "frequently used users" and asked for discussion about future use. By interacting with Google staff, the number of times API calls can be made for free is reduced from the previous "750,000 times per month" to "28,000 times per month", after the free range is exceeded It was informed that the fee was raised from $ 0.5 (about 60 yen) to $ 7 (about 800 yen) per 1,000 times of the past. Although there are major differences in prices between developed and developing countries, there is no difference in the usage fee for Google Maps.

Due to this price increase, the charge to maintain the service of In Der Apotheke has greatly jumped up. In Der Apotheke explains that the usage fee for Google Maps, which had been available for free so far, increased to 5000 dollars (about 550,000 yen) at a stroke and exceeded the other maintenance costs. 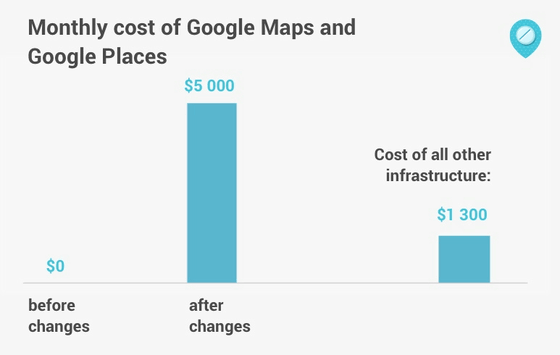 So I decided to compare the images of Google Maps and other major online map services. We compared online map services such as Google Maps, Mapbox , TomTom , Azure Maps , OpenStreetMap , Apple Maps , HERE Maps, and MapTiler and searched what kind of map is displayed near Warsaw with In Der Apotheke's base. is.

Then, it turned out that any map can be displayed at almost the same level as Google Maps. Only Azure Maps provided by Microsoft was a slightly blank map, but because Azure Maps was just released in June 2018 and the service period is still short. Microsoft is arguing that it is dare to make many blank spaces to add information that will benefit many companies from now on. The online map that In Der Apotheke needs is not only available in big cities such as Warsaw, but it also needs to work in smaller cities. For that reason, I also compared online map service in Konstantin , the neighboring town of Warsaw.

As a result, I found that even on a small town like Konstantin, it is displayed properly on any online map. At least in Poland, there seems to be no situation where "accurate maps are not displayed unless it is Google Maps." Among the online map services we have seen, OpenStreetMap is not expected to be used for commercial use, and Apple's "map" is released only in beta, so it may be difficult to switch immediately. In Der Apotheke says. We also excluded Azure Maps and HERE Maps from the viewpoint of map display, and finally In Der Apotheke decided to consider one of Mapbox, MapTiler, TomTom as an alternative to Google Maps.

It is a charge necessary for use that becomes a problem when actually switching. The usage fee structure of the online map service varies, and there are those with a highly transparent price system calculated by "API call times" like some Google Maps, "a rate-based billing system for each displayed map tile" There is also "There is change depending on map to display". Therefore, simple price comparison can not be done simply by looking at the price list.

In order to easily compare the fee required for using the online map service, In Der Apotheke upgraded the site so that you can easily switch map providers with Google Maps, Mapbox, MapTiler, and use it per day I tried to compare using fees actually. Then, it turns out that Google Maps costs $ 80 (about 9000 yen) for 15,000 site visits, whereas Mapbox and MapTiler find that they cost only about 9 dollars (about 1000 yen) I heard he did. 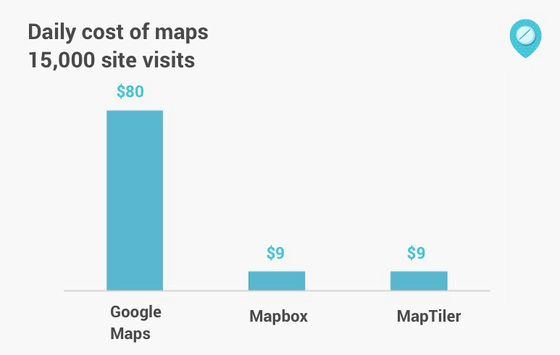 "Google Maps is a service that has been used for many users so far, and if it raises the price a bit, it may have continued to use it without concern for the user side," In Der Apotheke says. However, if a significant price increase like this time is done, the user will have to examine alternate means as well.

According to In Der Apotheke, once Google began pursuing profits like this, Google's concern that we could use free services so far may be charged as well . "In the future, I am going to leave Google related services," In Der Apotheke said.