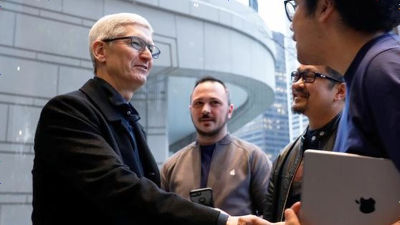 Three of Bill Gates, Steve Jobs and Mark Zuckerburg are known as examples of entrepreneurs' examples. And since these three people have been very successful by entrepreneurship in their early twenties, they decided to plant the concept of "Entrepreneur should be young" in many people. However, investigating the trends of American startup companies in recent years has revealed that middle-aged entrepreneurs are more likely to succeed than young entrepreneurs.

Young entrepreneurs were said to be more advantageous than age-old entrepreneurs because they have advantages such as "they are good at the latest technology," "flexible," "there are few obstacles in the home environment" . However, the National Economic Research Institute points out that the middle-aged entrepreneur is more likely to succeed than young entrepreneurs as a result of the survey.

The graph below shows the success status of startup entrepreneurs from 2007 to 2014. The vertical axis is the founder's share and the horizontal axis is the founder's age at start-up. The green line on the graph shows the proportion of the age of the founder of all start-up companies, the percentage of companies that the black line recorded the top 1% growth rate among start-up companies. Looking at the transition of the black line, we can see that the success rate of founder under 25 years old is low, the success rate gradually increases from 25 years old and over, peaks between 44 and 46 years old . 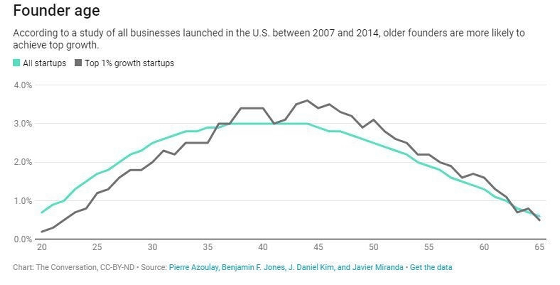 According to the survey results, "It may be necessary to rethink the educational program in the future," said Scan Raya Sawang, Associate Professor of Business Administration at Leicester University. Higher education institutions such as many business schools have stated that "MBA acquisition = having sufficient skills to succeed by entrepreneurship", we recommend starting a business simultaneously with MBA acquisition I will. Of course, many of the students who received this explanation from the school will think "I must start up after graduation", but Mr. Sawan says "I should stop it." Mr. Sawan said, "In the case of Mr. Jobs who was launched at the age of 21, it was when he was 52 years old who developed the iPhone, which has the greatest success, and there is no need to start a business in a hurry," Mr. Jobs also said, I am emphasizing that you do not have to start a business right away as it has great success since you have been loaded.

On the other hand, many of the entrepreneurs who have experienced business are often devoted to savings and house as collateral for funds needed at startup, and many people are not able to step into starting a business. So, Mr. Sawan said that "Business school may be better for those who wish to entrepreneurs who are experienced, rather than young students for entrepreneurship education," said the educational program and collateral By shifting the entrepreneurial subsidy system that can be accepted without the aid for middle-aged entrepreneurs, the success rate at startup will also rise, which will lead to the increase in school's name recognition.