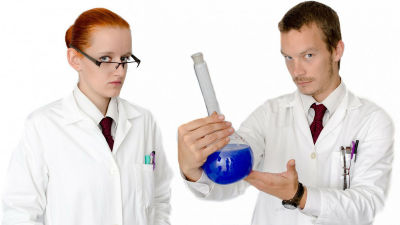 Just a few tweets on common people 's Twitter can have a big impact on the world, but it is the case for scientists as well. Research that investigated the ripple effects of tweets of scientists has revealed that tweets of scientists who have followers beyond a certain scale are widely transmitted to the public and have great influence.

Scientists on Twitter: Preaching to the choir or singing from the rooftops?
http://www.facetsjournal.com/doi/10.1139/facets-2018-0002#toc-supplementary-material-2

Isabelle Court of Simon Fraser University studied the influence that the tweets made by scientists and researchers have on the general community beyond the scientific community. In this research, researchers who specialize in ecology and evolutionary biology, Twitter is almost not used as private use for themselves, but more than 100 Twitter who only performs research tweets such as presentation of research results etc. Has been investigated and analyzed.

Court has classified 200 researchers listed in the EEMB into "professors", "associate professors", "assistant" and "those who conform to" from information on Twitter profile and Web search. And, in the last two weeks, 33 people who have not tweeted at all have been deleted and 110 accounts are randomly selected from them. In addition, the followers of 110 accounts were also examined, and the followers of "accountants of science", "graduate students / postdoctoral sciences", "scientific educators", "scientific organizations staff", "scientists in science fields", "welfare such as museums Facility staff "," Applied Science institution "" Media "" Policy maker (government official) "" General citizen "" Unknown ". Then, we compared the Twitter arrival rates of all followers using one-way analysis (ANOVA).

Followers of 76 men and 34 female scientists were followed, while 64,466 followers were mostly "scientists" as shown in Figure (a). It is common for scientists to follow scientists, and they seem to confirm each other's research content. Next to the peers are "common people", followed by "media". Figure (b) shows the distribution of the penetration rate of scientists' former tweets reaching followers of each follower. 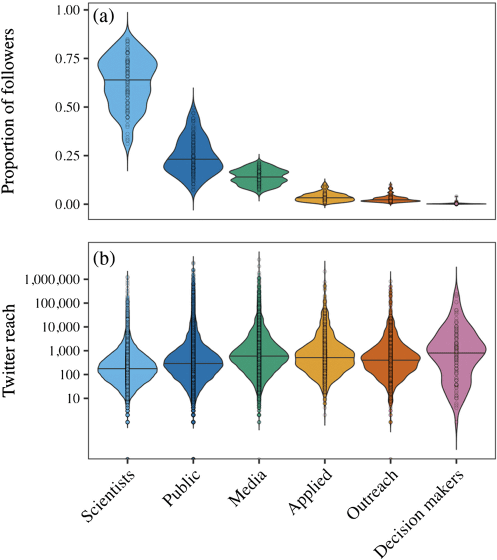 As the number of followers increases, the rate at which the information diffuses to reach the follower followers is increasing regardless of the attributes of the followers. However, very interestingly, the survey confirmed that at a follower number above a certain threshold, the rate at which tweets penetrated the follower's followers increases exponentially. In the case of "scientist's follower" (light blue), which is the most common follower among scientists, when the number exceeds 450, it is confirmed in the graph below that the penetration rate of tweets rapidly increases I can do it. 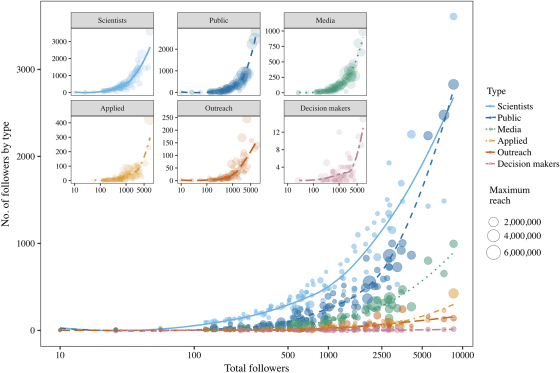 From this survey and analysis, we do not know how we felt the tweets that the follower did, such as the retweet, etc., and the degree of spread after the follower's followers, so we directly measure "influence of tweets of scientists" It is not something to do. However, there is no doubt that the penetration rate of tweets of scientists who have a follower of a certain size or higher is high, and in order to spread scientific information widely for scientists, securing a certain size of followers as early as possible It seems to be said that it is quite effective.