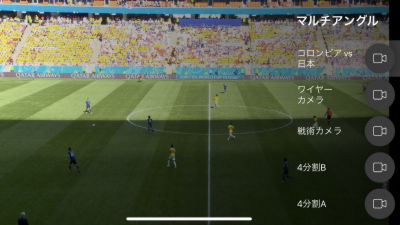 In the 2018 FIFA World Cup that started on June 14, 2018, there is an app " NHK 2018 FIFA World Cup " that enables NHK to view 32 games live on the ground wave in real time. There are 32 games delivered in real time, but since all 64 games to be held during the World Cup period can be viewed and overlooked, it is "It is an interesting card, but it is not being broadcast on terrestrial waves" "I want to see the game but start at 3 o'clock in the midnight ...." ... even if it is hard to see, how it can be viewed from the smartphone at full level, it is a level that worrys that NHK is too fat.

I have an iOS version and an Android version of the application, but this time I will install and use the iOS version. When you start up for the first time, terms of use are displayed, so tap "I agree".

The application's home screen looks something like this. At the top of the screen there is an indication "Today's Match" and the results of the match held on the day the application was launched are displayed. Swipe this area to the left ... ...

You can check another match result. If the match has already ended, you can check the score of the game and the points in the group by list.

In the case of the game before the opening, you can check the date and time of holding, the venue and the state of the press conference to be held on the day before the match.

Other than this, at the bottom of the home screen, overlooked games that have already ended · press conference · highlight (Japanese) · highlight movie · highlight video (short) · other · story · preview · goals · team news · competitions The latest information · Best goal & save · Host city information · Country profile etc can be watched in the movie.

By tapping "Favorites" at the bottom of the screen you can select your favorite team.

Tap the team you want to support most from 32 countries.

Then, the "favorite" tab will change to "cheering team".

32 games live on NHK by terrestrial broadcasting are in real time, others can be viewed as missed delivery after the match ends. However, it is necessary to be careful because the picture is not English with commentary delivered by NHK, it is of English commentary. Also, since the video has started about 1 hour before the start of the match, you can also see how the players coming to the stadium and warming up.

"Commentary" is displayed at the bottom of the screen, and it is possible to follow the course of the game in text format. If you are watching in real time, it will be added every time the game is played, but in case of missed delivery you can watch the game from that scene by tapping on the play you care about.

The score of the game and the play during the match will be displayed in text format. Score etc. are not displayed in the game video, so if you tap the screen and check regularly it is ok.

When you swipe the right end of the screen to the left, 'Multi-Ang' is displayed. What is displayed by standard is an angle often seen on TV broadcasting and the like.

By tapping "Wire Camera", you can watch the game at the angle from the wire camera located at the top of the pitch.

"Tactical camera" can see the game at the angle from the goal side of one team.

By tapping "4 division B", there are 4 cameras that were featured in Japanese national team players and directors ... ...

"4 division A" was featured on the information on Colombia side. Switching between the four camera angles is freely possible at any time.

Then swipe up in the bottom of the screen ...

It is possible to check in a text format a wonderful scene in the game. You can also jump to that scene at once by tapping it.

In case of portrait, "Members" who can check the list of players

"Multi angle" can be used to change the camera angle. Team data ranking is updated from time to time according to game situation, so even if it is overlooked delivery information will not be displayed before the game starts. In other words, when you are watching "the first half 30 minutes", team data ranking as of the first half 30 minutes will be displayed.

"Team data" can check data on the results of the game.

In addition, at "Schedule" at the bottom of the screen you can check the World Cup game schedule for each group league. By tapping the match result part you can always see the missed delivery of the game.

Also, by tapping "primary league" at the upper right of the screen, you can check the game result in three different categories, "primary league", "final tournament" and "by stadium". It is a very pointy specification that you can select a specific stadium and check only the outcome of the game held there.

The NHK 2018 FIFA World Cup app enables you to watch 32 games live on NHK by terrestrial broadcasting in real time, and you can also overlook and view all 64 matches held during World Cup. Because commentary will be in English, it may feel a little unsatisfactory for those who say "Explain the main points of the game firmly in Japanese commentary", but it may be appreciated by the person who said "No commentary is better" . Because not all of the World Cup matches are broadcasted, I checked the game that I care about with the NHK 2018 FIFA World Cup, missed the game "It's hard to watch in real-time at midnight start ..." ... It is enough to use it as checking with. You can also watch the game from angles that you can not usually see easily, and support while checking detailed data on matches, so keep the NHK 2018 FIFA World Cup app ready for the World Cup hot season that is still going on I highly recommend it.