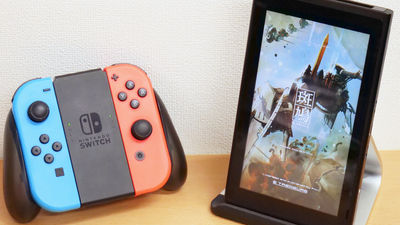 TreasureMasterpiece STG (shooting game) "Ikaruga IKARUGA"Is distributed as download-only software on Nintendo Switch from May 30, 2018 (Wednesday). Also, taking advantage of the features of Nintendo Switch, you can easily enjoy the vertical screen mode by putting the monitor on the monitor in a vertical position, you can taste the feeling of arcade game. Actually downloaded "Ikaruga IKARUGA" and played it.

You can see how the game "Ikaruga IKARUGA" is, the state of playing one side in the following movie.


"Ikaruga IKARUGA" was produced by Treasure and in 2001 started as a vertical scroll STG for arcade. As stated in the copy "" Ikaruga "" Ikaruga IKARUGA "breaks down the concept of existing STG," It will be advantageous to hit the enemy 's bullets and absorb it "in a copy called" Shoot! "," Avoid! "And ... ..." Hit! It became a topic in the game system, and it has also been ported to many domestic game machines such as Dreamcast · GameCube. The following image isDrawn for Switch versionIt is the title for the horizontal screen. The enemy aircraft has two attributes, white and black, white enemies are white bullets, black enemies are attacking with black bullets. You can switch attributes with yourself · Hypodromotion masses "Ikaruga" and "Silver chicken" with one button, and if it is a bullet of the same attribute, it is absorbed by the barrier field wrapping the flying iron mass I will. "Ikaruga IKARUGA" can switch through the scenes of the flying iron chunk according to the enemy's attack, so that it is possible to survive scenes which seem to be difficult at first glance. Of course, if attributes are different, they will be hurriedly dropped, so switching attributes must be done very carefully. In the following movie, you can see how to traverse the moving terrain and barrage while switching attributes.


If you absorb a bullet with the same attribute in the field, the gauge will accumulate and you can "hit" multiple enemies at the same time by "releasing power". In other words, according to the word "shoot!" "Avoid!" And ... .... "hit!" ", You can make an advantageous situation by proactively hitting enemy bullets. The state of "release of power" can be confirmed in the following movie.


Speaking of STG, it is one of the real thrills not only to clear, but also how to earn points (score). In "Ikaruga IKARUGA", if you defeat three enemies of the same attribute in succession, you can get a bonus point called chain combo every three bodies. Since this bonus point increases to 100 points, 200 points, 400 points, and 800 points, the point that can be obtained jumps up by attacking by thinking "How to defeat the enemy".

In fact, the following movie shows how the score changes when you suitably shoot the enemies that appear on the front of one side, and when you shoot with conscious of the chain combo. If you proceed without considering anything, the score at the time when the telop "Chapter: 01 ideal" comes out is around tens of thousands of points, but you can aim at a score of 30 to 400 thousand points just by aiming for a chain combo.


It should be noted, and defeat for the first time a boss you are in the last stage, performance is released, the icon in the "Achievements", which is displayed in the menu on the left and right of the game screen will be displayed. Also, if you prepare two pairs of Joy-Con, you can play with "Ikaruga IKARUGA" by two people. In "Ikaruga IKARUGA", when you play with two people, the attributes may be different from each other, and the difficulty increases because the amount of "shootback" that the enemy scatters bullets when it gets destroyed increases. Actually watching two player mode playing with two people can be seen in the following movie.


The point to pay attention to when playing "Ikaruga IKARUGA" with Nintendo Switch is that the Nintendo Switch can rotate the screen freely, so the vertical screen mode is easy to play. Since "Ikaruga IKARUGA" is originally designed as a vertical scroll shooting game, you can either play the screen by displaying the portrait screen in the horizontal screen or whether you want to reproduce the portrait screen monitor by rotating the monitor and the TV by 90 degrees There was only it. However, by putting the body of the switch vertically, you can enjoy the vertical screen shooting with ease by using the screen in full.

So, I tried using the stand of the tablet terminal that was in the editing department to put the main body of the switch vertically. 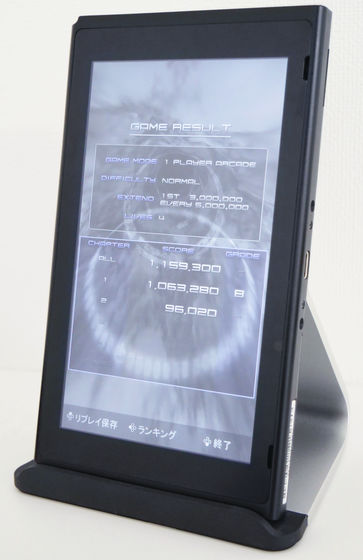 The movie below seems to have played "Ikaruga IKARUGA" by putting the Switch body vertically.


Of course the screen is fairly small compared to the actual arcade, but because it is beautifully colored, so much to worry about placing it on the desk is not that bad, and there is nothing to be particularly concerned about playing and having a big delay did. It is true that if the speaker is built in the main body, the power of sound will decrease by half, so if you want to enjoy music firmly, you should prepare an external speaker. 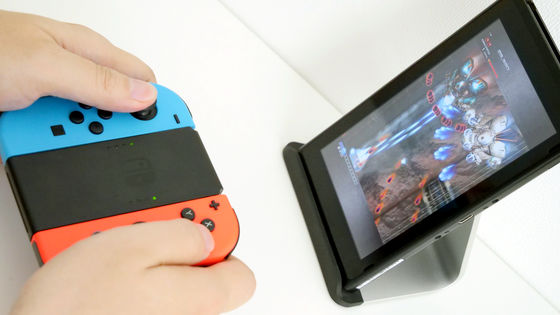 Although it is the genre "Vertical scroll vertical scroll STG", there are elements that are not found in other STGs, "switch between 2 black and white attributes and play while thinking about hitting bullets". When an editorial staff who had never actually played "Ikaruga IKARUGA" also played, there was also a voice saying "I feel like a puzzle because I play while thinking quite a bit." Also, taking advantage of the characteristics of Nintendo Switch, it is a nice point to play with ease on a vertical screen without moving the TV or monitor, even those who have played "Ikaruga IKARUGA" at the game center have played at all I can recommend it to those who have never been. Nintendo Switch's "Ikaruga IKARUGA" is downloading software and can be purchased at 1620 yen including tax.