Robot development company under SOFTBANK GroupBoston Dynamics(Boston · Dynamics) is developing a quadruped walking robot "SpotMiniWe announced that we will commercialize.

Mark Raybert, CEO of Boston Dynamics, announced the commercialization of SpotMini at "TC Sessions: Robotics 2018" held at the University of California, Berkeley.


There are already 10 SpotMini prototypes, 100 bodies will be manufactured by manufacturing partners within 2018 and they will be released in 2019. It is also possible to attach an arm like a fish to SpotMini which can carry weight of 14 kg. You can grab things and open doors. This arm will also be offered as an option. Laybert did not reveal the specific price, but SpotMini which appeared in the latest movie below can be manufactured at a low price of 1/10 of the conventional model. Mass production is planned in the middle of 2019, and the price seems to be even lower.


As planned in the movie, we plan to release a camera option to put on the back. Three-dimensional scanning of the surrounding environment with multiple cameras makes it possible to steadily grasp the surrounding situation and proceed.

There is no plan to market Atlas, a bipedal walking robot. 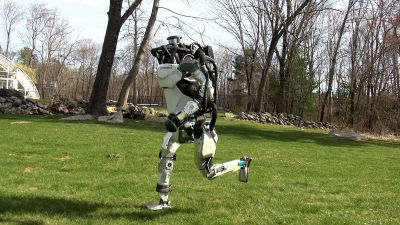