"China is carrying a rail gun on warships and is promoting development?" The ship belonging to the Chinese Navy, electromagnetic acceleration gun said to be difficult to put into practical use even the US military "Rail gun"Observation that a kind of thing is mounted is calling up a topic with several pictures.

Is This Chinese Navy Ship Equipped With An Experimental Electromagnetic Railgun? - The Drive
http://www.thedrive.com/the-war-zone/18119/is-this-chinese-navy-ship-equipped-with-an-experimental-electromagnetic-railgun

One piece of photograph being taken is kore. You can see that a huge turret with a disproportionate size is installed at the bow of the warship with "936" and hull number. This ship belongs to the People's Liberation Army Navy of China and commissioned in 1996072 type landing shipIt is thought that it was remodeled "Ocean Mountain".


According to this illustration, the placement of the system is such that the gun barrel and the automatic weapon are placed on the bow, behind which the electric system and operation stations etc. for arranging the electricity consumed in a large amount in the rail gun are arranged in the container .

A picture taken from a place like a highway is also posted. When you look at the ship up close, you can see that there are several containers on the deck with such feeling. A part of the electric power system and a container. According to analysis of Chinese net people, the length of the bow portion is 35 meters for a vessel of 119.5 meters in length. And it is estimated that the total length of the turret and barrel of the 35 m bow will be 21 m.

Unlike cannons that fire cannonballs with normal gunpowder, the rail gun has an electromagnetic induction force "Lorentz force"To accelerate the shell to Mach 7 in 10 milliseconds and realize higher attack power and long shooting distance than when using explosives. In October 2017 the Chinese authorities officially admitted the development of the railgun.

The development of the railgun is advanced even in the US military. Railgun that full-scale development has been in progress since about 2005, the actual launch landscape was made public in 2015, and development for practical use has been progressed. 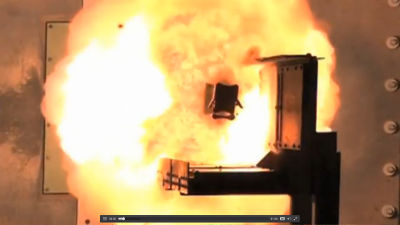 However, it is said that there are many difficulties to put into practical use, and at the end of 2017 the news that the US Navy abandoned the practical application of railgun has been reported. It seems inevitable that the Chinese Navy could make rail guns a thing and attract attention mainly around neighboring countries.