Steve Wozniak, co-founder of Apple Computer (now Apple), said, "I do not believe anything Elon Mask or Tesla says." Mr. Wozniak of Tesla Model S is a passionate car seems to be tired of being often not realized if CEO Mr. Mask makes a bold plan.

Steve Wozniak: 'I do not believe anything Elon Musk or Tesla says' - BGR
http://bgr.com/2018/01/30/elon-musk-vs-woz-doesnt-trust-tesla-anymore-self-driving/

Steve Wozniak: 'I do not believe anything Elon Musk or Tesla says'
http://www.siliconbeat.com/2018/01/29/steve-wozniak-dont-believe-anything-elon-musk-tesla-says/

Mr. Wozniak is a Tesla owner with two Tesla Model S. Mr. Wozniak made a complaint about Tesla's car in an open interview with Nordic Business Forum held in Stockholm, Sweden.

Mr. Wozniak says that the tires have stuck in the snow as they have been removed from the snowy road while driving around Lake Tahoe in the past. However, despite the trouble, the trust in Tesla vehicles has not changed, the automatic parking function "SummonIt is said that they are enjoying the semi-automatic driving function, such as introducing it as soon as it appears. Mr. Wozniak's dissatisfaction is not in Tesla's car itself, but it is said by a mask CEO led by Tesla. According to Mr. Wozniak, as an example of what Mask CEO told "I will make a fully automated driving car in the US by the end of 2016" but eventually broke down with Israeli sensor manufacturer Mobileye, eventually did not happen I am criticizing that the mask CEO does not keep promises.


Tesla drives itself (no human input at all) thru urban streets to highway to streets, then find a parking spothttps://t.co/V2T7KGMPBo


Although it suggested the addition of full automatic operation function in the middle of 2017, it did not come to realization, and further deadline of automatic driving function was postponed until the end of 2017, but it was not realized at the time of article creation. 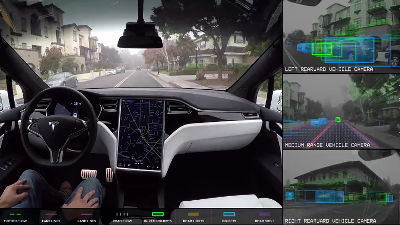 In response to this situation, Mr. Wozniak said, "I believed, now I do not believe anything about Earon Mask or Tesla, although I love Model S itself," I will.

It is Mr. Wozniak who loves model S itself, but he seems to be dissatisfied with Tesla's semi-automatic driving function "Autopilot", and speaking of the automatic driving technique at the present time, BMW and Audi are better than Tesla It seems to believe that it is also preceding. It also reveals that Chevrolet Volt EV is used instead of model S in almost all situations, except when it is used for long distance drive like Kansas City to Yellowstone. In a public interview, Mr. Wozniak, who has a strong spirit of service, said, "I love Tesla's car, but it's a matter that the Earon mask is drawn to lack faith and trust. Oh, can you believe it? He is a "good salesman" like Steve Jobs, maybe not ", he said.