What is a humanoid robot that imitates humans to human body ratio, skeletal structure, range of joint motion? There are many robots in the world,Humanoid robot capable of berthingYaRobot that can feel pain and respondRobots that are closer to actual human beings are born. Meanwhile, in JapanThe University of Tokyo School of Information Science and Technology · Information System Engineering Laboratory, But we are developing a humanoid robot that brings everything from humans to humans, from skeletons to the range of motion of the joints, close to humans.

This humanoid robot works out (and sweats) like we do (or should) | TechCrunch
https://techcrunch.com/2017/12/20/this-humanoid-robot-works-out-and-sweats-like-we-do-or-should/ The skeletal structure imitates human beings, and the curvilinear spine passing through the middle of the body, chest, knee, pelvis etc. are also reproduced using metal and machine parts respectively. It seems that imitating the arrangement of human muscles and arranging springs etc. which become muscles of the machine. The range of motion of each joint is also set in the same way as a human being, and the legs can be opened 70 degrees right and left, the neck is bent by 78 degrees in the front direction and 83 degrees in the back direction, It imitates the movement of the human body. I have imitated the structure of humans thoroughly so far, but if you just develop a "robot that lifts heavy objects", for example, fine imitation is not necessary. However, TechCrunch notes that 'Human-like robots' of the same structure as humans should be more useful when humanoid robots are increasingly increasing in the future and coexistence of humans and robots is required It is.

In addition, Kenshiro is under development from 2012, it seems that he is modeling on Japan's average 13-year-old boy with a height of 160 cm and a weight of 51.9 kg. Humanoid robot "Kengoro (Kengoro)" after one generation, made under the same theory as Kenshiro, was introduced on the "IEEE Spectrum", a journal of the American electrical engineering technology in 2016, and GIGAZINE But I am writing it as an article. 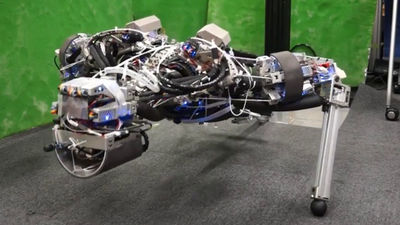 A new type of humanoid robot that Kengoro has been developed since 2016. Height is 167 cm, weight is 56.5 kg, and he / she has the same height and weight as real people. A porous material frame with high penetrability like a sponge in which aluminum is laser sintered is used for Kengorrow. When the motor, which is the power of Kengorrow, generates heat and "body temperature" rises, injecting water into a porous material frame like this sponge makes it possible to suppress the heat of the motor oozing out of water. This is the "sweaty" state for Kengorrow. It has imitated not only the structure of the whole body but also the physiological phenomenon of sweating. 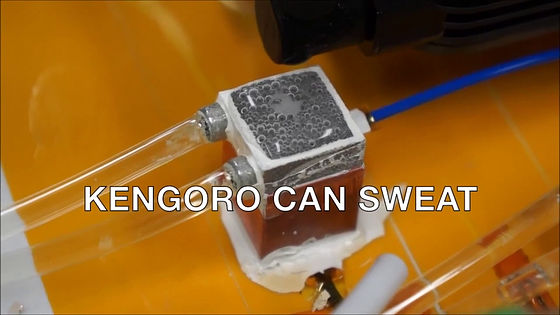