Small celestial bodies flying from outside the solar system "Aum Amua" is a cigar type, rocky or metallic The small celestial body "A / 2017 U1" which was found on October 19, 2017, confirmed to have flew out of the solar system for the first time in history was revisedParrot Amua"Is closest to the sun on 9th September, closest to the Earth on 14th October. Although it was already being away from the earth at the time of discovery, intensive observation was done and various things turned out.

A brief visit from a red and extremely elongated interstellar asteroid | Nature
https://www.nature.com/articles/nature25020


It was theorized that there are asteroids and comets that move between stars, but it was thought that it could not be observed because of the small and dark even if the heavenly bodies actually flew. It was the first time that Parrot Aumua was able to observe celestial bodies from outside the solar system and Paul Choudas of the Center for Nebula Astrophysics near the Earth said that "We have been waiting this day for decades." Amuamua Flying and observer movement etc. are collected in the following article.

"We waited for this decade for this day", confirmed a mysterious celestial body thought to have come from outside the solar system - GIGAZINE 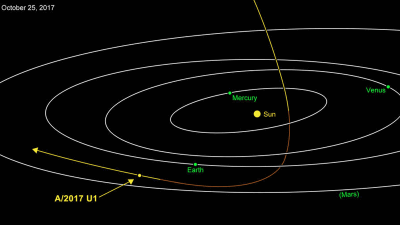 Through intensive observation on the lettuce parakeum, it turned out that Parrot Amua had a cigar shape with a length to width ratio of 10: 1. The following is a CG illustration (imaginary view) of Parrot Amua by the Southern California Observatory of Europe, which is not seen in asteroids and comets in the solar system. Length is estimated to be estimated to be 400 m - 800 m. Due to the influence of taking cosmic rays for many years, the surface is "somewhat reddish gray", and it means that it is rotating on the axis every 7.3 hours. There is no water or ice, it is made of rocks and metal, and density seems to be high.

Parrot closest to the earth on 14th October and which had already been away from the Earth at the time of discovery on October 19 passed through Mars orbit around November 1st. Currently it is flying with Jupiter orbit, it is thought that it passes Jupiter orbit in May 2018, and passes Saturn's orbit in January 2019.

As for the flying origin,VegaIt is known that it is from the direction of, but when we calculate the orbit and speed, I also know that it was not born around Vega.