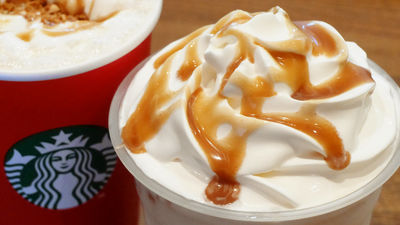 The World Health Organization (WHO) has

called for the recommended amount of sugar an adult to consume per day to be reduced to about 25 grams (about 6 teaspoons), which is half the previous amount, but Starbucks drinks It has been revealed that it contains as much as 25 teaspoons of sugar, which is about four times the daily standard amount.

The cafes serving drinks with 25 teaspoons of sugar per cup | Business | The Guardian
http://www.theguardian.com/business/2016/feb/17/cafe-chains-selling-drinks-25-teaspoons-sugar-starbucks-costa-coffee 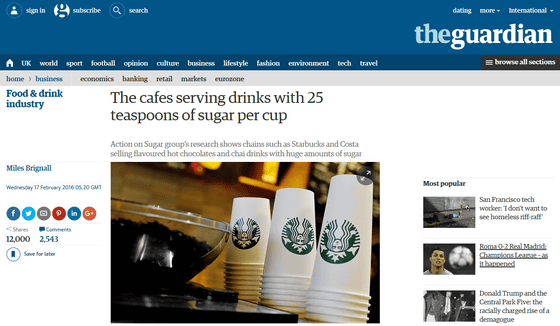 In the UK research group ' Action on Sugar ', doctors, nutritionists, and public health experts are conducting research on the effects of sugar on health. Action on Sugar fears that sugar-rich drinks are sold in coffee shops around the city, and conducted a survey to find out how much sugar is in the drinks. ..

The survey covered all 131 hot drinks, including flavored latte, chai, tea, mocha coffee, and fruit drinks with spices, offered at nine major coffee shops and fast food shops in the UK. type. According to the report, 98% of the 131 drinks reach the 'red zone', which contains more than 13.5 grams of sugar, and 35% of the drinks contain more than 9 teaspoons of sugar, Coca-Cola. The amount is more than one can.

The drink that was rated as the 'worst offender' in the report was Starbucks' Grape Mulled Fruits , a hot drink with spices. According to Action on Sugar, it contains sugar equivalent to 25 teaspoons of sugar. Compared to Coca-Cola, it contains about three times as much sugar. Also, the popular 'Vanilla Latte' and 'Caramel Macchiato' in Starbucks, England, have both been found to contain more than 8 teaspoons of sugar. Looking at the drinks from major chain stores other than Starbucks, the British coffee chain

Action on Sugar conducted a survey of drinks in the United Kingdom, but when we analyzed the drink ingredient list posted on the website of coffee chain stores, we also found drinks sold in the United States and other countries. The same can be said. Researcher Kawther Hashem said, 'Sugar-rich drinks are good for occasional luxury drinks and should not be taken daily because they are incredibly high in sugar and high in calories. It's better to avoid drinking it with sugary sweets and snacks. '

In addition, Starbucks has declared to CNN that 'we will cut 25% of sugar for major drinks by 2020', 'At Starbucks shops, sugar to be added to drinks is sugar-free syrup or sugar. You can also replace it with other natural sweeteners. You can always find the ingredients for your drink on the store's menu and website. '