What is the 'official' scripting that causes all Hollywood blockbusters to look alike? 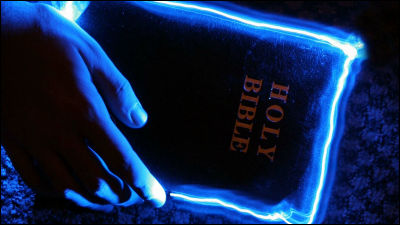 If you feel that 'every recent movie is similar and boring ...', that impression may be justified. There is a script-making 'official' among the script writers of Hollywood movies, and it seems that cats and scoops are making scenarios according to this official in recent movies. What is the formula for a movie scenario?

Save the Movie! --Slate Magazine
http://www.slate.com/articles/arts/culturebox/2013/07/hollywood_and_blake_snyder_s_screenwriting_book_save_the_cat.single.html

◆ Official script 'Beat Sheet Method'
The 'beats ' of recent Hollywood movies are all the same. The protagonist is always punished by a good comprehension in the first 15 minutes, the bad guys are always deliberately caught, and usually 30 minutes before the end time, the bottom of the story awaits. This is because there is a certain 'official' in the script of the movie, but very few people know it.

This formula was created by Blake Snyder 's ' Save the Cat! The Last Book on Screenwriting You'll Ever Need. ', A movie script bible. Snyder, who was a successful script writer and a leader in script writing, describes in his book ' Three Actions, ' which has dominated blockbuster films since the late 1970s. Three-action is a method of assembling a story development with three structures: 'preparation stage', 'conflict', and 'solution'. This book is all the rage in Hollywood because it wasn't written by previous movie script writers.

He subdivided the three actions into the 15 beats that hold the key to the story, each corresponding to a script page. These were named beatsheets. The movie story consisted of 15 beats, and the script evenly allocated pages to each beat. This technique was called 'minute-to-minute' and supported Snyder's filmmaking philosophy. Snyder believed that a masterpiece would always contain these 15 beats.

Here is an example of a beat sheet actually made by Snyder. You can see that the story consists of 15 beats from the start image to the final image, and the pages are distributed roughly evenly accordingly. 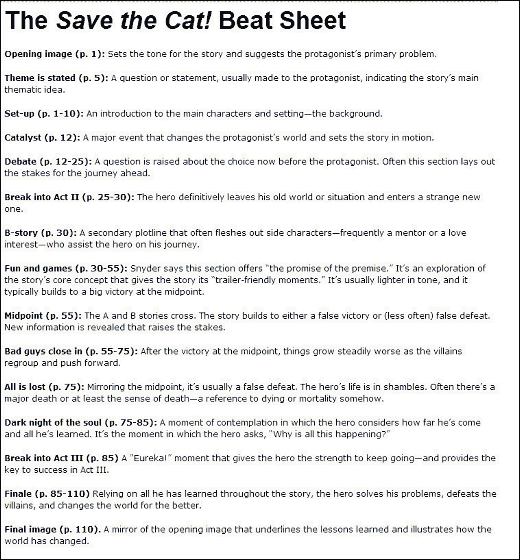 ◆ Beat seats that dominate Hollywood
Until his death in 2009, Snyder emphasized that 'beats are skeletons, not absolute formulas, and beatsheets are not based on long-standing filmmaking techniques.' It is claimed that beatsheets are just a way to make good works, not necessarily suitable for making movie scripts. However, the beatsheet method was quickly introduced into the Hollywood movie world.

If you look at the movie with this Snyder's beatsheet method in mind, for example, in '

LA Gangster Squad ', the boss told the hot-blooded detective Josh Brolin at the beginning of the work, 'Hey young. Here. The scene that growls 'There is a rule of' is the second beat. It's a 110-minute movie, so you should allocate about 7 minutes. There was a shootout in the middle, then everything was ruined, and finally the villain died suddenly as planned. These are deployments according to Snyder's sheet method.

In fact, if you go to the cinema, you can find movies made with Snyder's beatsheet method here and there. Most major titles today are in the official scenario of beatsheets. But once you know this formula, you're curious about beat-to-beat stitching. It is sometimes half-forced and even deliberate. Eventually, all the movies seem the same .

◆ Male hero derived from the beat sheet method
Three actions backed by a beat sheet require the presence of a hero, the hero who throws the theme. And because young men are the ones who go to the movies the most, heroes for young men are inevitably preferred. That's why in the scene where a hero is born, he says 'This is a story of a certain Guy ...' and never says 'This is a story of a certain person ...'. Also, because the hero is a man, women are literally forced into supporting roles. A woman is portrayed as a person who helps the young male protagonist solve a very personal problem. It's no coincidence that Sam Raimi's fantasy movie ' Oz the Great and Powerful Battle ', which had a huge production cost, featured Digs instead of Dorothy.

However, Snyder does not say in his book 'Save the Cat!' That 'a man should be the main character .' However, in many Hollywood movies that incorporate three-action and beatsheet methods only on the upper side without fully understanding Snyder's intentions, it is a rule that a man is the main character.

It would be boring to watch a movie made by using the apparent technique without understanding the true meaning of Snyder's 'official', and it would only be a repetition of the mundane. I can't count how many times I've seen the story of 'a young male hero gets into trouble and struggles to gain new power and save the world.' 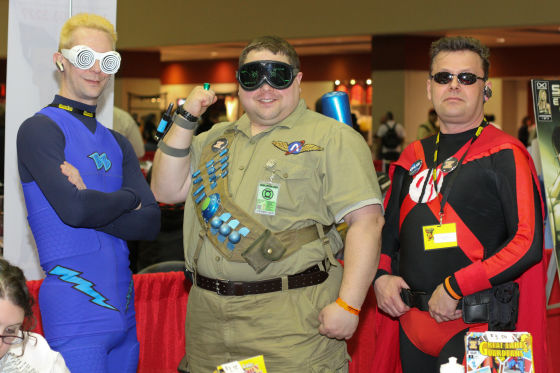 ◆ Huge production costs and official faith
This kind of mundane story development is also due to the huge amount of movie production costs. Major studios are increasingly relying on a small number of investors to give them huge budgets. Being a blockbuster means a big risk. It's a big risk that you can't afford to fail. An easy way to reduce this risk is to follow what has worked, that is , to blindly follow Snyder's formula . As a result, every Hollywood blockbuster is a repeat of the same thing.

Of course, it doesn't mean that you can't make 'official', fun and good works with the beatsheet method. Star Wars, Die Hard, The Matrix, and Bourne Legacy are all as Snyder's official, but they are all interesting works. However, it is not necessary to continue the work of the young male protagonist. 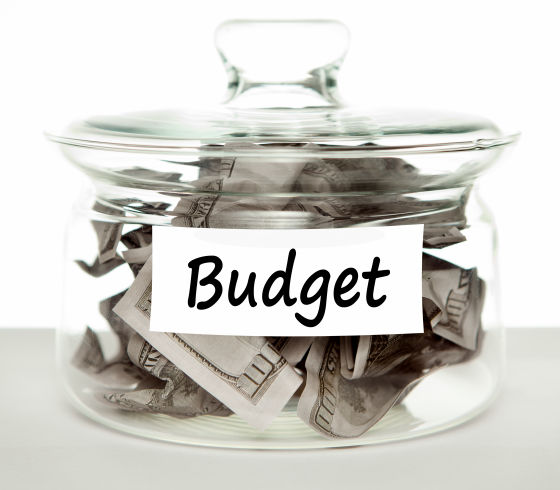 ◆ What should a Hollywood movie script look like?
If you think of old-fashioned entertainment works like Jurassic Park, it's certainly a three-action story structure that includes beats. However, there is no 'official' in its original form. In other words, it is a good example that there is room for a 'small challenge' to move away from the official in making an interesting movie.