Demo review on "Ninokuni: The Another World" with Animation by Studio Ghibli 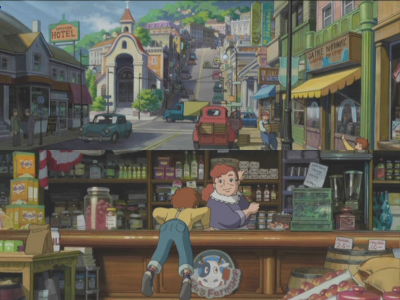 Of the game demo and trailers handed out by Level-5 at Tokyo Game Show 2009, this post will review Ninokuni (The Another World), the much buzzed-about role-playing video game of which Studio Ghibli developed the animation aspects.

Read on for details and pics.
Nintendo DS Software | Ni no Kuni

Characters, background and the overall settings have the distinctive Ghibli touch, most Ghibli fans won't be disappointed. The fairy Shizuku might be irritating to some people, like Sandy in Dragon Quest 9. The street reminds you of Kiki's Delivery Service. When his tears hit the doll given to him by his mother... 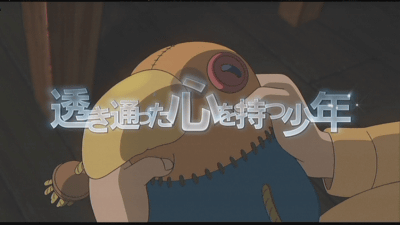 The doll becomes alive as Shizuku, fairy of tears from "Ninokuni", the another world. Oddly enough, he speaks in Kansai dialect. Oliver has an "extremely clear soul". Since it's said to be "the one with the clearest soul" who can defeat the evil mage Jaboh, Shizuku asks him to come to "Ninokuni". Told by Shizku that he may be able to revive his mother at Ninokuni, Oliver makes his mind. And his journey begins. The town "Goronel Kingdom" is where they first visit in Ninokuni. The evil mage Jaboh has the ability to erase part of people's mind such as "aspiration", "enthusiasm" and "trust". People who stood against Jaboh either lost the part of their mind or turned into another being like Shizuku. The yawning tiger-like King must have lost his motivation. The Emperor doesn't trust anybody. 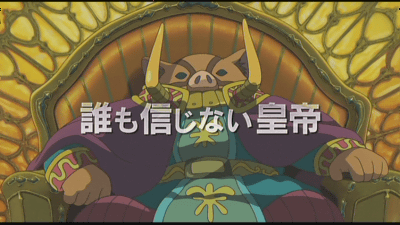 Kind of reminds you of some Doraemon movies. A bit. The music by Joe Hisaishi who composed many scores for Ghibli films is performed by full orchestra. We strongly recommend you to use some good headphones or plug loudspeakers to your NDS. The unique method of drawing magical signs on the touchscreen to save people who lost their heart is a great idea. Another interesting system is, using the stylus you can change the formation of your team freely during a battle. For example, you can use one of your stronger characters to shield the vulnerable ones.

♦ The battle scenes are not very thrilling.

Music for minor battles were not so great. The enemy and background are beautifully detailed, but the overall idyllic feeling like '90s RPG won't give you much excitement.

The characters are tiny and walk really slow on the field map, probably to stress the grandiosity of the "Ninokuni" world.

♦ "Yuusha Point System" can be a burden

"Yuusha Point (Hero Point)" will be given to you when you accomplish some good deeds on sub-events. The system might make the game more enjoyable for your second go or if you're the type to play thoroughly, but when you want to stick to the main plot it gets in the way. At some points in the adventure you're required to have predesignated amount of Hero Points in order to get going, so you need to go through some sub-events whether you like it or not. If too much Hero Points are tasked the repetitive chore can be exhausting, which may spoil the whole game.

Here are some screenshots of the gameplay. Your adventure starts from this forest. Our overall impression:
The music's good, the setting's well-made and the animation is great, but we couldn't help feeling a lack of something. With some polishing and a touch of spicing up, this could have been a ground-breaking title.