A team of German-based scientists have used a CT scan to analyze the mummy of an infant born to a 16th- and 17th-century Austrian aristocrat, and have identified the cause of death as ' vitamin D deficiency due to lack of sunlight. ' did.

Mummified Baby From Centuries Ago May Have Died From Lack of Sunlight : ScienceAlert
https://www.sciencealert.com/mummified-baby-from-centuries-ago-may-have-died-from-lack-of-sunlight

The mummy that was investigated by CT scan this time is a mummy of an infant who is considered to be the eldest son of Count Starchenberg , one of Austria's oldest aristocrats. The mummy was found in the basement of the Count Starchenberg family, but was only covered with a silk coat and the wooden coffin had no infant's name or other information engraved on it.

The research was conducted by a research team represented by

Andreas Nerlich , a pathologist at Bogenhausen Hospital in Munich. Mr. Nerlich et al. Conducted CT scans and radiocarbon dating, etc., and clarified the cause of death and the era of death of this mummy.

Below is an image of an infant's mummy taken by CT scan. 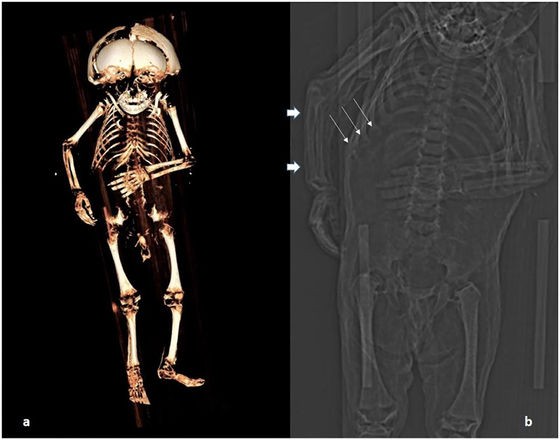 As a result of radiocarbon dating and CT scans, the research team identified the mummy as a boy who died between 10 and 18 months of age and was buried between 1550 and 1635. 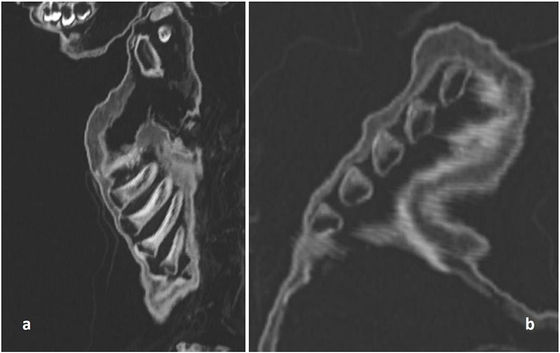 Rakitic Rosary '' and is regarded as one of the symptoms of `` rickets '' caused by vitamin D deficiency, and it is believed that this infant was also `` rickets ''. 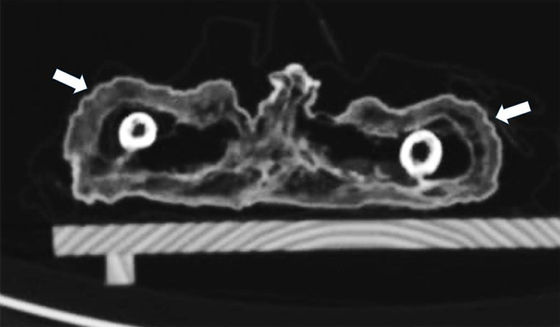 The researchers also considered the possibility that the bone abnormalities were caused by scurvy caused by vitamin C deficiency, but the soft tissues of the boy's body indicated he was obese, and dietary vitamins It was speculated that the amount of C was sufficient. Therefore, the research team argues that the infant was likely deficient in vitamin D, a consequence of which led to bone abnormalities and death from pneumonia.

As to why this infant was obese yet deficient in vitamin D, Nerlich said, 'The combination of obesity and severe vitamin D deficiency is associated with generally good nutritional status and almost complete sun exposure. It can only be explained by a lack of it,” he said, suggesting that infants were deficient in vitamin D because they were not getting enough sunlight to produce it.

The infant also had signs of pneumonia. Vitamin D deficiency has been shown to exacerbate pneumonia, which has been linked to death.

Mr. Nerlich said that the reason why this infant became vitamin D deficient due to lack of sunlight was ``People of the aristocracy in the 16th and 17th centuries avoided exposure to sunlight, especially sunburn.Aristocrats have white and thin skin. , It was the workers who were sunburned. Similarly, Count Starchenberg's infants were deficient in vitamin D due to the lack of UV light on their skin.'