Dogs and humans have long been closely related as partners.In Spain,

In November 2020, during a development project at Clermont-Ferrand Auvergne Airport in central France, archaeological sites spanning the Middle Ages from around 800 BC were discovered. In January 2021, a team from the French National Rescue Archeology Institute (INRAP) , who undertook the excavation, reported that they had found the grave of an infant about one year old who was buried about 2000 years ago. It is said that the body of the infant was housed in a wooden casket with a total length of about 80 cm. Although the casket was highly corroded at the time of discovery, iron tags and nails to attach to the casket, which are believed to have once decorated the casket, have also been found. In addition, it seems that it was difficult to determine whether the infant was a boy or a girl only by anatomical analysis.

The size of the tomb was about 2m in length and 1m in width, and the casket was enshrined surrounded by nearly 20 burial items such as unglazed (

terracotta ) pots and glass pots. At that time, it was customary to bury a part of the meal served at the burial banquet with the dead, and in the pot and glass pot, pig ham and fillets, two headless chickens, oil, medicine It is believed that such items were included.

Laurence Lautier, head of the excavation team, said of the tomb discovered this time, 'It's unusual because it's rich in pots and offerings. This type of tomb usually has one or two pots on the floor. However, about 20 kinds of meals are served at this grave. ' It is said that a large amount of burial goods indicate that the infant had a high social status and was a child of a wealthy family. 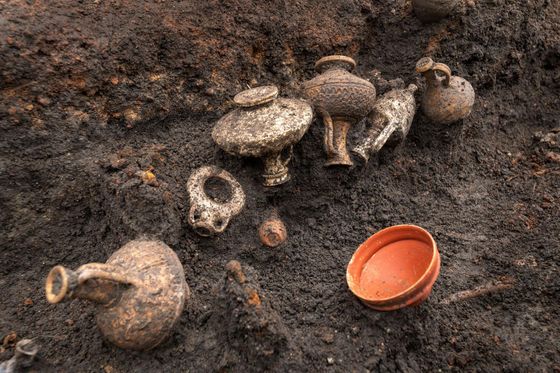 Archaeologists also discovered copper pins that seemed to hold the cloth that wraps the body, iron rings about 30 cm in diameter attached to bent iron rods, and the milk teeth of children, who appear to be siblings of infants. I am. The iron ring is believed to have been a toy for toddlers.

A puppy was also found in the tomb, and it was said that he wore a bronze decoration and a collar decorated with a small bell. Archaeologists said, 'The relationship between dogs and young children in the funeral context is well documented, but this is unusual in terms of collars and bells.'