Many people who have dogs at home or in their parents' homes have had the experience of a dog they met after returning from outside or when they returned home, wagging their tails as much as they could. A study that observed changes in dogs reunited with their owners who hadn't seen each other for a while found that dogs shed tears when reunited.

Increase of tear volume in dogs after reunion with owners is mediated by oxytocin: Current Biology

According to a joint research team of Azabu University, Jichi Medical University, and Keio University, dogs that meet their owners for the first time in a long time show friendly attitudes such as staring at their owners, wagging their tails, jumping, and licking their owners' faces. The level of oxytocin , sometimes called the hormone, also increases.

Below is a video released by the research team as a document showing the appearance of a dog reunited with its owner.


Two black dogs who haven't seen their owners for six months are jumping on a woman with great excitement. 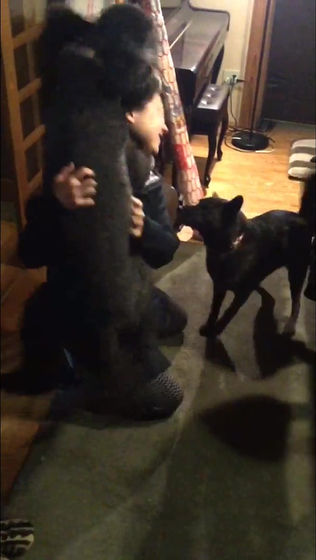 The Standard Poodle, who is especially warmly welcomed, is called Kochi. 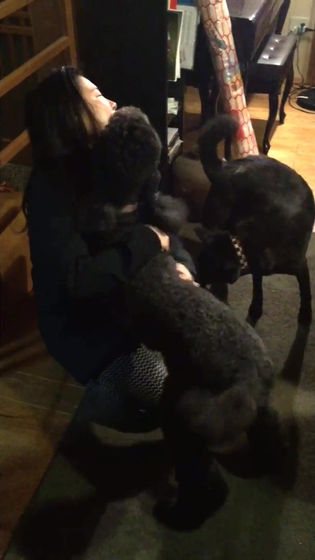 From the appearance of these dogs, the research team hypothesized that ``dogs reunited with their owners may secrete tears through oxytocin.'' I did. The subjects of the experiment were 18 dogs kept in ordinary households. Participating owners and dogs were reunited after 5-7 hours apart, and the amount of tears produced by the dogs within 5 minutes of reunion was measured.

As a result, it was confirmed that the amount of tears increased in dogs who were reunited with their owners. The increase in the amount of tears was not observed when reunited with others, and was significantly increased only when reunited after parting with the owner. Regarding this, the research team said, ``We found that an increase in tear production was observed in situations where the dog's emotions changed drastically, such as reunion after separation from the owner, who has a special relationship with the dog.'' increase. 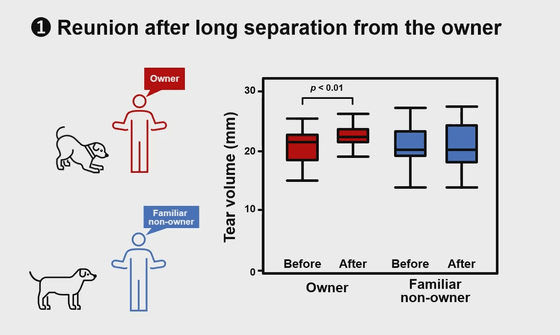 A second study in which oxytocin was applied to 22 dogs also confirmed that the dogs produced more tears. Therefore, the research team next hypothesized that ``the tears that dogs shed when they are reunited may have the effect of encouraging human care.'' was photographed, and 74 subjects were asked to compare it with the photograph before instillation.

As a result, it was found that dogs with watery eyes gave a more positive impression to the subjects. Specifically, photos of dogs with eye drops increased the number of people wanting to take care of them by 10-15% compared to photos without them. 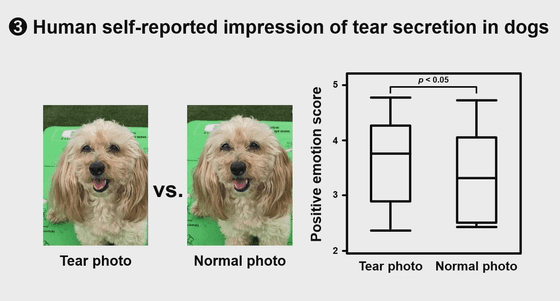 From this point of view, the research team said in the paper, ``Unlike other animals, dogs have evolved and domesticated through communication with humans, and have acquired advanced communication skills with humans through eye contact. , it is possible that dogs' tears played a role in eliciting protective and nurturing behaviors by their owners, which deepened their relationships with each other and led to further interspecies bonding.'