Huge sunspots that double in size in one day are facing the earth, and there is a possibility that telephone lines and the Internet will be cut off. 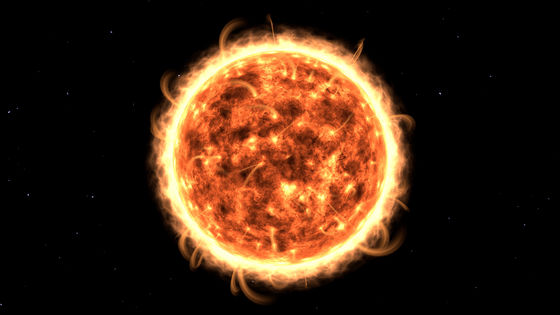 Sunspots on the Earth's side can cause

solar flares that can cause communication problems. According to NASA scientists, sunspots called 'AR3038' have doubled in size every day for three days, increasing the likelihood of massive solar flares day by day. increase.

Giant Sunspot Has Doubled in Size in 24 Hours and It's Pointed at Earth
https://www.newsweek.com/sunspot-surface-sun-doubles-size-solar-flare-earth-1717343

Rob Stenberg, head of the Space Weather Bureau within the US National Oceanic and Atmospheric Administration , said the sunspot, called the 'AR3038,' has swelled enormously in a week. However, regarding the size and growth rate of sunspots, Stenberg says it is 'quite normal.' According to Stenberg, sunspots generally grow over time, undergo gradual growth, and then collapse.

According to NASA , sunspots appear darker because they are cooler than the rest of the sun's surface. More specifically, it seems that a strong magnetic field is formed so as to prevent the heat in the sun from reaching the surface, and the temperature becomes low, resulting in sunspots. 'Simply put, sunspots are magnetically active areas,' Stenberg said. Solar flares emanating from sunspots are sudden explosions of energy caused by entanglement, crossing, or reorganization of magnetic lines of force near sunspots. Regarding solar flares, Stenberg said, 'You can describe it as a twist of a rubber band. If you put some rubber bands on your fingers and entangle them, the rubber bands will eventually twist too much and break. The difference is that they can reconnect. In the process of this reconnection, flares occur. '

The larger and more complex the sunspots, the more likely it is that solar flares will occur. The 'AR3038' observed this time is as follows. Goddard Space Flight Center in the Department of Heliophysics, said the AR3038 has doubled in size per day for three days and is already about 2.5 times larger than Earth. Said it has grown to the size of.

Dean Pesnell, a scientist at the Solar Dynamics Observatory at NASA, said of the AR3038, 'It's not unusually fast growing, it's a little smaller in size, and it's a reasonably sized area of activity. It can be said that there is. '

Andres Muñoz Jaramiro, Chief Scientist at the Southwest Institute, also wants to emphasize that you don't have to panic about the AR3038. This can happen all the time, and we're affected by this sunspot. We are preparing everything we can to predict and mitigate, but for the majority there is nothing to worry about. ' According to Jaramiro, there are various levels of solar flares, with A, B, C, M, and X increasing in intensity. Each class has a finer scale, which is represented using numbers. The higher this number, the higher the intensity of the solar flare.

The Space Weather Prediction Center will send alerts as needed, but as of the morning of the 21st, it has not issued a warning regarding solar flares.