The CPU specs of 'Tachyum Prodigy', which handles CPU, GPU, and TPU with one chip, are revealed, and the maximum clock frequency is 5.7GHz, 128 cores, and TDP 950W monster specs. Tachyum has announced the ' Prodigy ' chip, which integrates the functions of CPU, GPU, and TPU into a single architecture. Prodigy's CPU specs are up to 128 cores, operating frequency is 5.7GHz, 16-channel DDR5 memory, TDP is 950W, and technology media Wccftech describes it as 'insane specs'.

Prodigy is a universal processor that can perform CPU, GPU, and TPU tasks on the same chip. Since all tasks can be performed on the same chip, it has the characteristics of high performance while being able to save costs compared to competing products. In a presentation that announced Prodigy, Tachyum said, 'Prodigy performs four times as much as Intel's Xeon CPU on HPC , three times as much on HPC as NVIDIA's H100 , and six on AI & inference workload. We will achieve double the performance. ' It also emphasizes that it can achieve more than 10 times the performance with the same power compared to the systems of competitors.

The characteristic specifications of Prodigy are as follows. 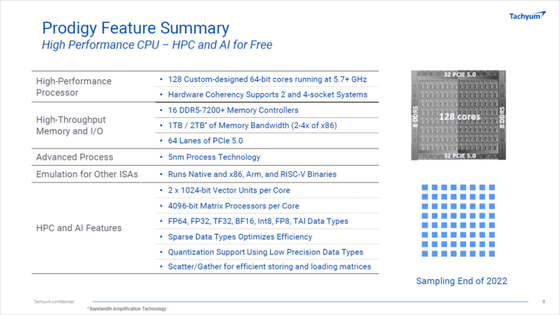 The specifications of each model of Prodigy are as follows.

Since Prodigy supports two or four multi-sockets, it is possible to build a system with up to 512 cores and TDP 3800W consisting of four T16128-AIX. All Prodigy is manufactured on TSMC's 5nm process node, and the instruction set architecture supports native and x86 / ARM architecture / RISC-V .

Some of the unique features related to HPC and AI include: 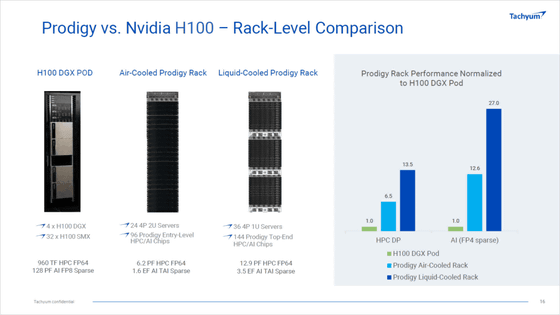 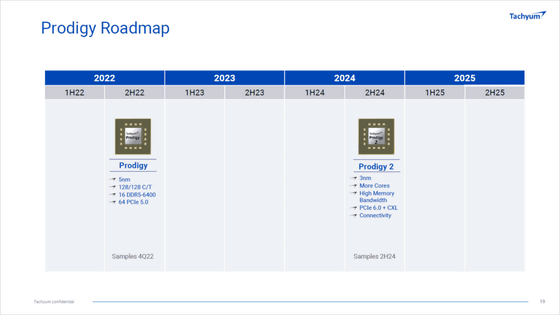