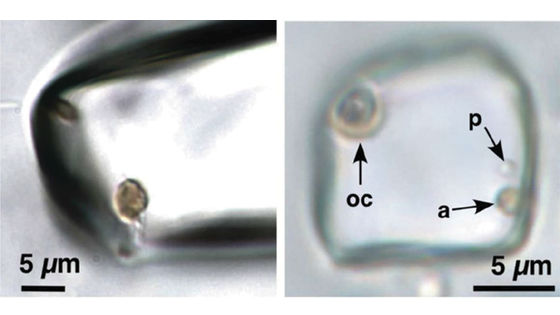 Geologists have discovered that the liquid in natural salt crystals, halite (rock salt), has a reaction consistent with prokaryotic and eukaryotic cells and organic compounds. Some of this organic matter may still be alive. 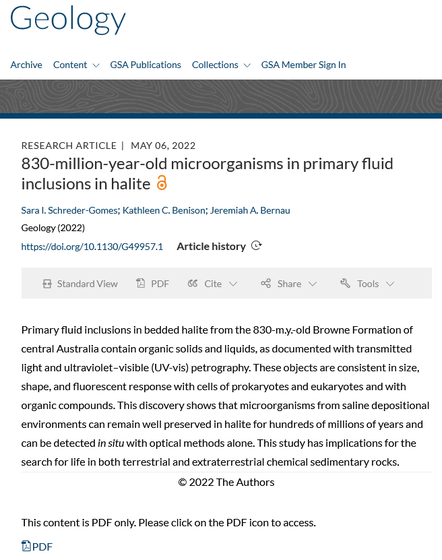 The paper was written by geologist Sarah Shredder Gomes of West Virginia University and others, and was published in Geology, an academic journal of GeoScience World, an NGO related to earth science.

Ancient fossils are often found in ' shale ', which is a rock formation of mud deposited in water, and salt does not preserve organic matter like rocks. However, when rock salt is produced in a salt water environment, it may trap a small amount of liquid called 'fluid inclusions', and it is possible to obtain information on the water temperature, water quality, and atmosphere at the time when the mineral was formed. I have.

Gomes et al. Used a non-invasive optical sample of a formation called the Brown Formation taken by the Western Australian Geological Survey in 1997 in central Australia, which is known to have been oceanic in ancient times. We conducted a survey of rock salt in the Neoproterozoic (1 billion to 544200 years ago) using the method.

The method is to first identify rock salt crystals at a low magnification, then magnify up to 2000 times to examine the internal fluid, and perform petrological analysis using transmitted light and ultraviolet rays.

As a result, solids and liquids of organic matter that match the cells of prokaryotes and eukaryotes were found based on their size, shape, and fluorescence intensity of ultraviolet rays.

Fluorescence intensity studies show that some samples show a color that matches the decay of organic matter, while others show the same fluorescence as modern organisms, suggesting that the organic matter does not change, the researchers say. ..

In addition, this 'fluid inclusion' functions as a micro habitat (micro habitat) for small colonies to breed, and there is a possibility that some of the organic matter is alive.

Gomes and colleagues say that the results of this study, which show how to identify organisms without destroying core samples, are also absolutely meaningful for Mars, where deposits with a composition similar to the Brown Formation can be found.