TikTok from China is a short movie sharing service that is popular all over the world, especially among young people. TikTok will display recommended movies based on personal information such as the user's age, gender, and place of residence. The Norwegian public broadcaster, the Norwegian Broadcasting Corporation (NRK), is experimenting with fictitious users living in Russia and Ukraine to see what makes a difference in the recommended movies displayed.

Kharkiv , a city in northeastern Ukraine, and Belgorod, the capital of Belgorod Oblast, Russia, are only about 70 km apart across the border between Ukraine and Russia. 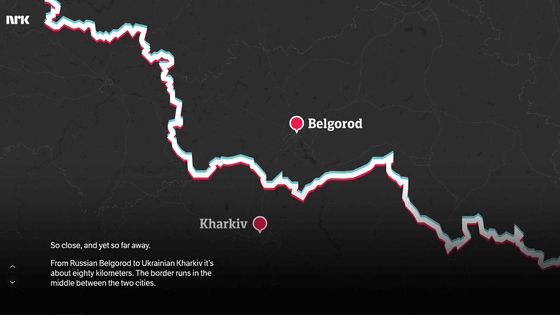 In Russia, where Belgorod is located, access to overseas social media such as Facebook, Instagram, and Twitter is prohibited. However, TikTok from China can be accessed from Russia at the time of writing the article. Therefore, NRK created two accounts, 'Nikolai-kun' living in Kharkiv and 'Alexei-kun' living in Belgorod, using the IP addresses of Kharkiv and Belgorod. Both accounts are set to male gender and 19 years old, which is quite young for military service. 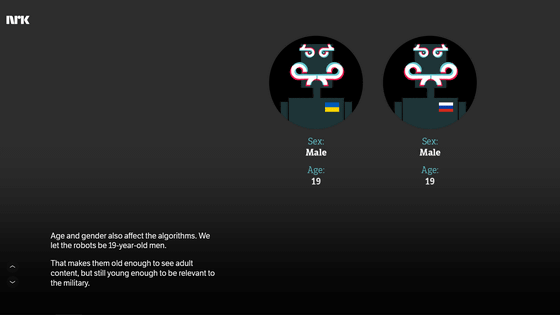 In addition, NRK set a fictitious face photo created by AI in the profile and compared what kind of movie would be recommended. 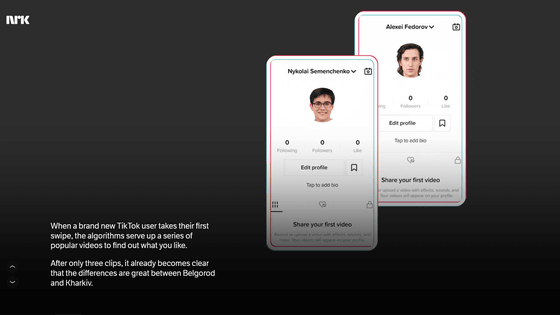 Nikolai, who lives in Kharkov, recommends only movies in which a man in military uniform talks about his patriotism for Ukraine and the message that 'it is a human duty to participate in the battle'. 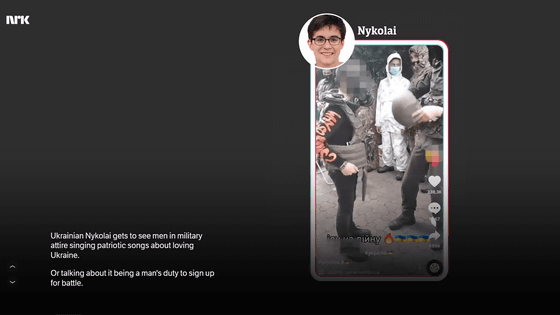 On the other hand, for Alexei's account in Belgorod, we recommended movies of cute animals and movies of TikToker wearing handmade clothes. 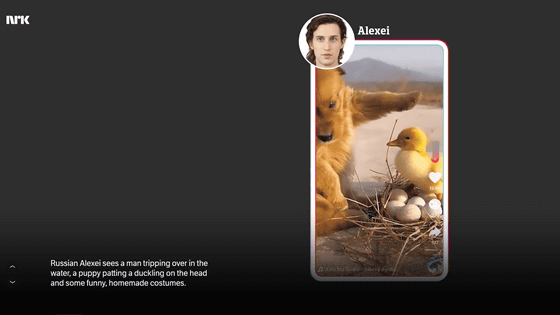 On the other hand, of the 25 videos recommended by Alexei, only 4 are about war. One of them was a performance by Ukrainian President Zelensky during his comedian era. One of the reasons why few of the movies recommended by Alexei are of war is the 'fake news law', which fines platforms that have information that the Russian government claims to be false. In March 2022, TikTok

announced that it would stop uploading and livestreaming videos from Russia. 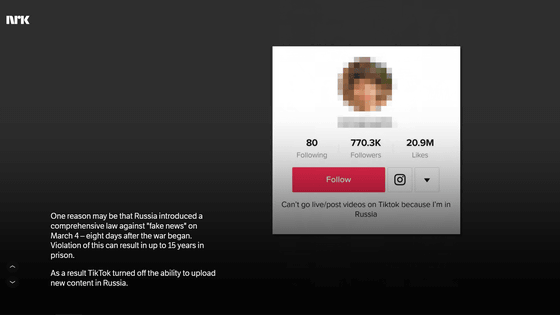 Therefore, the war-related movies recommended by Alexei were shot before or immediately after the invasion of Ukraine. Over the course of a few days, NRK watched over 600 recommended movies on two accounts. The tags displayed below are those attached to the videos that Nikolai watched, such as 'Ukraine,' 'War,' 'Zelensky,' and 'Damn Putin.' 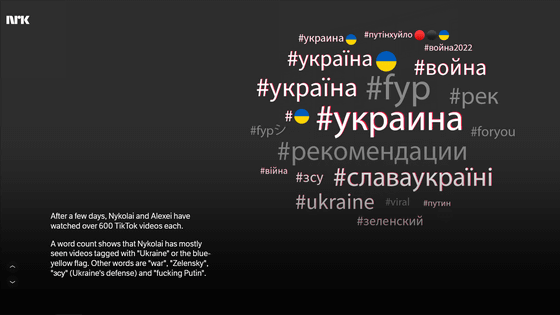 On the other hand, the tags of the movies that Alexei saw include the names of cosmetic brands and the song titles of popular rappers. However, it seems that there was only one tag, 'нетвойне (against war)'. 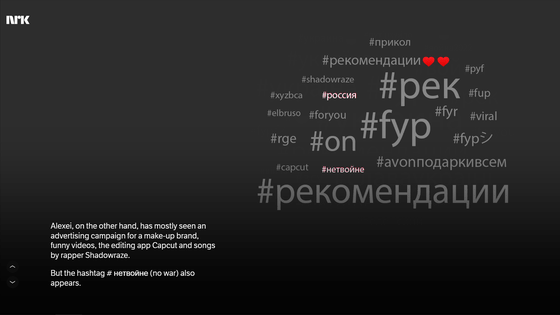 New content will be added to Nikolai's recommendations, including war-related videos, but Alexei's recommended videos have hardly changed. The only movie related to the invasion of Ukraine was the moment when a missile hit a building in Kharkiv. 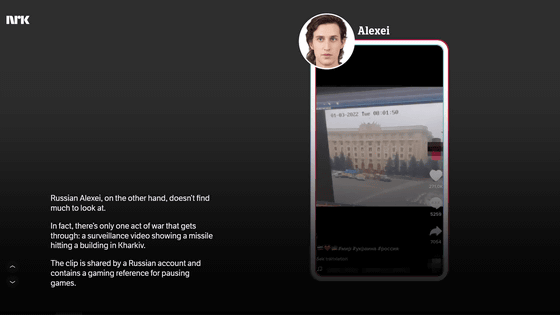 When I tried to access the video recommended by Nikolai from Alexei's account, the message 'This movie cannot be watched at this time' was displayed. 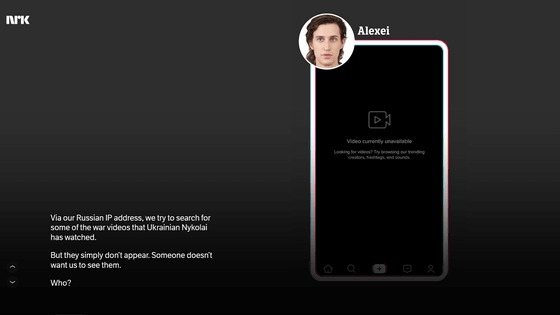 When NRK asked TikTok about the results of this experiment, TikTok said, 'Livestreaming to video services in Russia while considering the security implications of this law in the light of Russia's new fake news law. There is no choice but to suspend the new content. ' 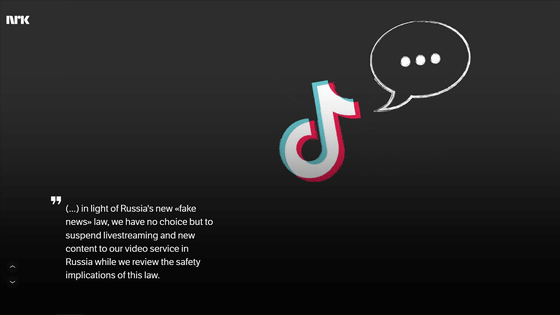 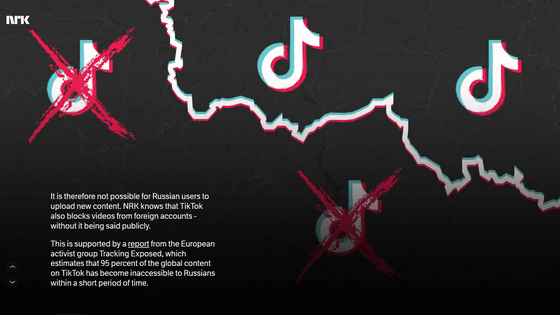 The number of movies that could be seen on both Nikolai and Alexei's accounts was only 19 out of a total of 4000. All of them seemed to have nothing to do with the invasion of Ukraine, such as 'I tried to sing' and 'I tried to dance'. 'Geographically, Kharkiv and Belgorod are not so far apart, but their inhabitants live in separate worlds on TikTok,' NRK commented.