The 8th episode of ' Anyway, I want to bully Asahina-san ', which depicts a mysterious relationship between a young lady who is not a friend and a childhood friend, will be updated on February 16, 2022. Along with the notice, you can see the bookshelf with a list of pre-release & making & back numbers only for

◆ 'Anyway, I want to bully Asahina-san' Episode 8 Synopsis
Hikaru Asahina, the only daughter of a millionaire, has been spending a little time with Yuhi Yahashi since she was a child.
We were good friends. We were always playing together almost every day.
The last days come suddenly.

The manga pre-release is from the following.

Anyway, Mr. Asahina who wants to be bullied Episode 8 'Two people at that time' 'Anyway, I want to bully Asahina-san' is a serialization from the entries for the GIGAZINE Manga Awards. We are always looking for original scripts, drawings, and of course manga works, so if you are interested, please refer to the details from the link below and apply. Thank you for your continued support. ◆ Profile of the author of 'Mr. Asahina who wants to be bullied anyway'
Manga: Junta
https://twitter.com/junta420 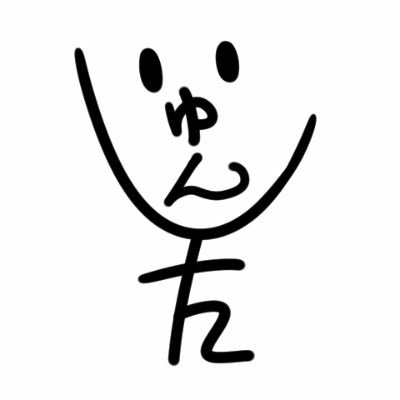 Register with GSC to pre-read serialized manga and get limited information!
◆ Members-only material Episode 8 Making 'Episode 7 & Episode 8 Botcut'
At the time of production of 'Anyway, I want to bully Asahina-san', the flow is to first come up with a plan for the content of the story or picture by name, see it, and repeat the corrections to complete it. Among them, there are also frame pages, so-called 'botscuts,' which were 'in the first plan but changed to different contents when completed.' By looking at the botcut, you can know how it was thought at the time of production, so I will explain all the botcuts of episodes 7 and 8 found in the manuscript at the time of production.

First of all, it is only a slight change, but although the basic contents are the same from the initial plan on the left of the image, the violence of 'blocking the door of the karaoke shop with a board' is added on the right of the image. This is the intention that Hikaru's behavior of forcing him to practice singing unreasonably becomes milder and easier to convey by acting in a blunt manner rather than just ordering. When you want to express something, if you are not aiming for an intentional effect, it is important to skip it without adjusting it. The left of the image below is the bottom cut of the 7th episode and the 3rd page. It's an interesting flow to show that Yuhito sings and feels comfortable, and Hikaru feels sick because he's too bad at singing. ?? I was concerned about that. As a result, it was changed to a flow in which exchanges are exchanged speedily as shown on the right of the image. There are many cases where the time it takes to read = satisfaction, so there is room for consideration so that you can enjoy as much information as possible. 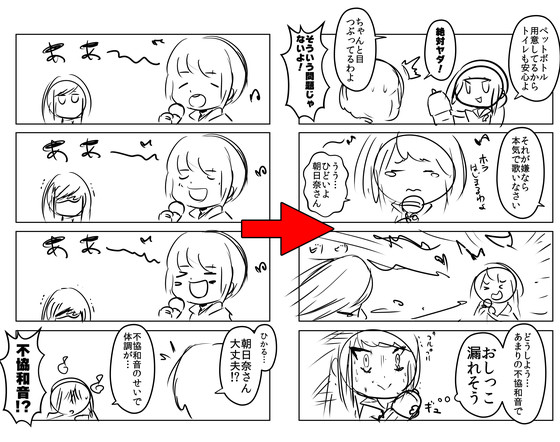 There was also a big change on the 4th page of the following 7 episodes. In the initial plan on the left of the image, 'Yuhi who decides to practice singing' is drawn, but the concept of the work is 'Hikaru unconscious Yuhi is forcibly special training'. In order to maintain that, I asked Yuhi to remain dim, as in the third frame on the right of the image, 'Eh? Is it necessary?' 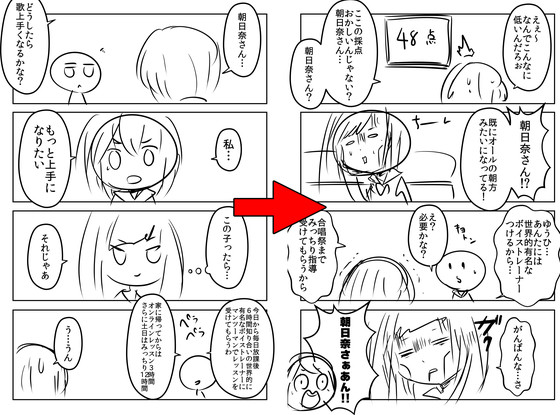 The following is also a bot cut of 7 episodes. Although it is interesting, the flow of 'making Yuhi realize that he is not good at singing' has changed, so this cut in between has also become a crap. In the 8th episode, there weren't many cuts that weren't good enough, but I found some minor changes. On the page of the image below, the composition of the character remains in the final version, but the content of the lines has been changed. In addition, the last frame was changed to a cut that 'Hikaru's' bullying 'starts'. Episode 8 will be an episode of recollection, so we need to finally return to the modern timeline. As the landing point, it is better to put Hikaru's 'bullying', so I adjusted it around that. The final page was examined for several patterns. Although it is only a fine adjustment, the last page is related to the feeling after reading and the overall satisfaction, so it can be said that 'If you spend one day on pages 1-9, you should spend the same day only on the last 10 pages.' You need to think carefully. On the contrary, if you decide the last page tightly, it should be easier to make episodes in between. Finally, as a bonus, you should be careful about the composition if possible. The right and left of the image are different pages, but the composition of 'Hikaru's back view' looks almost the same. It's a waste for readers to think, 'I saw this picture a while ago,' so I should think about 'Isn't there a composition that is too fogged?'

We will continue to release treasured materials that are limited to GSC and show the secrets and know-how, so please continue to support 'Mr. Asahina who wants to be bullied'.