The Easter egg that Bill Gates had secretly prepared was deleted without his knowledge. Leonard Tramiel, who was involved in the development of Commodore 's PET 2001 and Atari 's Atari ST in the early days of computers, wrote an anecdote with Microsoft founder Bill Gates, who he met at a computer trade fair.

If Looks Could Kill
https://vintagecomputerstories.blogspot.com/2022/01/if-looks-could-kill.html

Mr. Tramiel, who was involved in the development of early computers and game consoles, was demonstrating Commodore's PET (Personal Electronic Transactor), which he was involved in developing at a computer trade fair. Tramiel, who was answering questions from people who stopped by the demonstration, noticed that Microsoft founder Bill Gates was among the people around him. Gates entered the Microsoft BASIC WAIT command. This command allows a very low level of access to the system hardware, and the program will not proceed to the next step until the memory location of the first parameter meets certain criteria. However, in the Commodore BASIC installed in PET, 'WAIT6502' was designed to function as a hidden command. This hidden command was developed by Gates himself, the developer of Microsoft BASIC, which was the basis of Commodore BASIC. 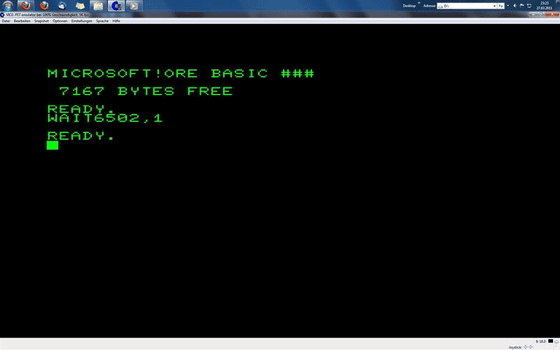 The hidden command was added from version 2 of Commodore BASIC released in 1979, but has been removed by the Commodore developers since version 2.

To Gates, who was hung with PET, Tramiel said, 'Bill, WAIT6502 has nothing (deleted), so the device freezes.' ' Microsoft BASIC is important for this machine. It's a part, 'said Gates, who seemed satisfied and left the Commodore exhibition space.

In addition, Mr. Tramiel wrote that the reason for deleting the hidden command of 'WAIT6502' was 'simply because it was a bug'.