What is 'space anemia' in which red blood cells are destroyed in outer space? It is known that the body of an astronaut who has completed a mission in space undergoes changes in gene expression and body weight. One of such changes in the body is a symptom called 'space anemia, ' and new research results have been announced that are one step closer to elucidating the mechanism of this space anemia. 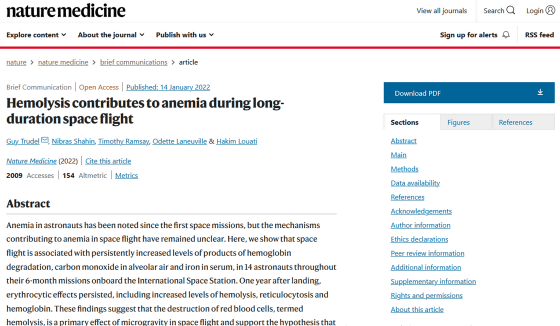 We don't know why, but being in space causes us to destroy our blood | Ars Technica
https://arstechnica.com/science/2022/01/we-dont-know-why-but-being-in-space-causes-us-to-destroy-our-blood/

According to JAXA's commentary , in the body of an astronaut staying in outer space, a large amount of body fluid will collect in the upper body and blood will be concentrated. When blood is concentrated, the risk of blood clots increases, so red blood cells are destroyed ( hemolysis ) in order to dilute the concentrated blood, reducing the overall blood volume. This is a condition called space anemia.

The outline of space anemia is explained above, but the detailed mechanism of its development has not been elucidated. Therefore, a research team of Guy Trudell and others belonging to Ottawa Hospital investigated changes in the blood components of astronauts over time in order to elucidate the mechanism of space anemia. The cause of 1.5 times more hemolysis in outer space has not been clarified. Trudell speculates that the cause is in the bone marrow or spleen, and says he wants to clarify the cause in future investigations. He also intends to pursue research on space anemia during long-term stays in space for more than 6 months.

In addition, according to Trudell, people with heart problems and those who are prone to blood clots are at risk of complications in outer space. From this, technology-related media Ars Technica points out that 'Given the current situation where space travel has become a reality, the results of this study may warn some space travelers.'