Theft of virtual currency by North Korean hacker groups is increasing year by year &amp; the method is getting worse Cyber attacks from North Korea are steadily increasing, and in 2021, at least seven attacks on cryptocurrency exchanges and investment companies with a scale of 400 million dollars (about 46 billion yen) will be carried out from North Korea. It was said that. The amount of damage caused by hacking by North Korea has also increased by 40%.

Chainalysis, a research company that provides data and analysis on blockchain, has announced the results of a follow-up survey of virtual currencies stolen by such a North Korean hacker group.

The graph below shows the breakdown of cryptocurrencies stolen by North Korea. Bitcoin (red) is less than a quarter of the total, and the proportion of Bitcoin is decreasing year by year. In contrast, Ethereum (yellow) is increasing year by year, with 58% of the cryptocurrencies stolen in 2021 being Ethereum. In addition, there are increasing cases where virtual currencies (blue) other than Ethereum's token standard ERC-20 (green) and Bitcoin Ethereum are stolen.

Stealing this ERC-20 and other cryptocurrencies also shows the deterioration of the tactics by North Korean hacker groups. ERC-20 and other cryptocurrencies are exchanged for Ethereum via Decentralized Transactions (DEX). This Ethereum is 'mixed' to increase anonymity by mixing multiple transaction data so that the flow of funds is not tracked. The mixed Ethereum will be exchanged for Bitcoin, which will be further mixed before being transferred to the new wallet.

Announced that it has moved to an address managed by a North Korean hacker group with Bitcoin. This hacker group exchanged the stolen ERC for Ethereum, mixed it, exchanged it for Bitcoin, and mixed it again. As a result, a virtual currency of 91.35 million dollars (about 10.4 billion yen) was laundered and deposited on the virtual currency exchange in Asia.

Since the purpose of laundering virtual currency is to prevent the identification of attackers, it is said that the frequency of attackers related to North Korea performing virtual currency mixing is increasing year by year. The bar graph below shows the percentage of work done in laundering, blue-green indicates mixing, and after 2019 you can see that mixing is rapidly increasing. This suggests that the North Korean hacker group has become more cautious with each passing year, according to Chainalysis.

However, this $ 55 million was due to an attack carried out in 2016, and it is said that it is still deposited in a specific wallet without being laundered. In other words, a cryptocurrency that has not been laundered for the next six years is sleeping in North Korea. 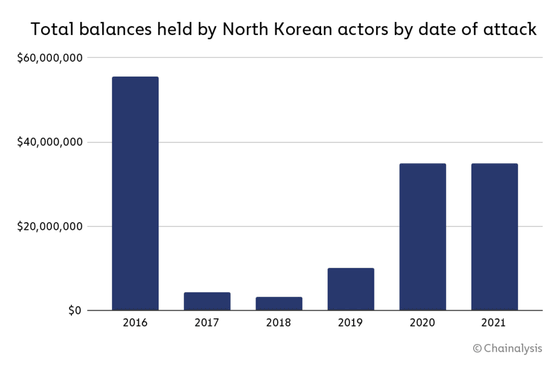 Chainalysis said, 'These data together reveal a nation that supports cryptocurrency crimes on a large scale. The organized and sophisticated North Korean government is through the Lazarus Group and other crime syndications. However, many cryptocurrencies are transparent, establishing themselves as an advanced and lasting threat to the crypto industry in 2021. By using blockchain analysis tools, compliance teams and criminal investigations Officials, hacking victims can track the movement of stolen money, keep up with the opportunity to freeze or seize assets, and hold malicious actors accountable for crimes. '