' Pokémon GO ' is a smartphone game where you can get Pokemon that appear in various places and fight Pokemon that you have raised. Many people around the world are playing Pokemon GO, but Los Angeles Police Department police officers have been fired for 'failing to respond to robbers to catch Snorlax.' 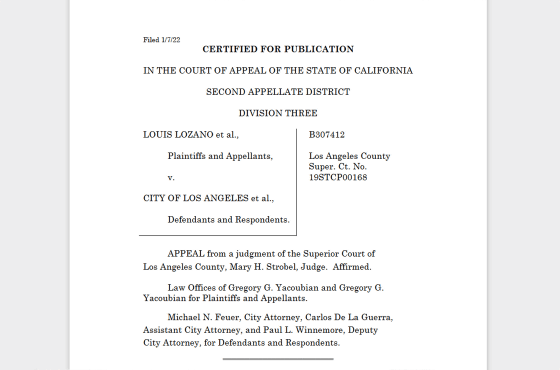 LAPD officers fired for catching a Snorlax instead of a burglar denied appeal --The Verge
https://www.theverge.com/2022/1/10/22877217/lapd-officers-fired-for-playing-pokemon-go

A court document released on January 7, 2022 details a case in which two former Los Angeles Police Department officers were so enthusiastic about Pokemon GO that they were dismissed. In April 2017, when the incident that caused the dismissal occurred, then Los Angeles Police Department police officers Luis Rosano and Eric Mitchell were summoned to respond to a robbery incident inside a Los Angeles shopping mall. It was done. Many police officers in the area answered the call and went to the scene to respond to the robbery, but the two did not answer the call.

According to confirmed audio recordings, Mitchell told Rosano that 'Snorlax had appeared' shortly after receiving the call for the robbery, and the two of them went to catch Snorlax after considering the best route. matter. Also, along the way, Mr. Mitchell seems to have been completely absorbed in Pokemon GO, such as saying 'Togetic came out'. 'Mitchell and Rosano did not catch the robbers, but Snorlax and Togetic did,' reports Motherboard, a foreign media outlet. In response to the interrogation, the two said, 'We were just trying to get the' image 'of Pokemon, not playing the' game '.' 'Pokemon GO is not advertised as a' game. ' , It is a 'social media event' ', but the claim was not accepted and it was dismissed.

The City of Los Angeles Rights Commission, which decided to dismiss, said, 'Playing with Pokemon GO completely ignores the community, wastes resources, betrays the trust of the public, disqualifies as a professional, and is shameful to the agency. 'Their actions reflect serious negligence, timidity, lack of thought, and false schemes,' he criticizes.

The two then said, 'The in-car recording system is not intended to monitor police officers' private conversations.' 'In fact, they weren't playing Pokemon GO, and the series of conversations provided information. I just shared it with the group. ' However, a series of court records were released after the California Court of Appeals dismissed the case on January 7, 2022.