Communication was cut off throughout Kazakhstan during a state of emergency, and Russian-led military dispatch was also made to calm the situation. Internet shut down in Kazakhstan amid unrest

Kazakhstan is known as a producer of oil and natural gas, but the Kazakhstan government abolished the control from January 2022 because price control of liquefied natural gas is affecting producers. As a result, gas prices have doubled, and protests have broke out in Zhanaozen, a town near the Caspian Sea. Eventually, the protest spread throughout the country.

Communication has been cut off in Kazakhstan as President Tokaev declares a state of emergency throughout the country. The first blockage occurred on January 4, mainly affecting mobile services and some fixed lines.

⚠️ Confirmed: #Kazakhstan is now in the midst of a nation-scale internet blackout after a day of mobile internet disruptions and partial restrictions.

The incident is likely to severely limit coverage of escalating anti-government protests.

The net recovered once after noon on January 5, but went down again before dawn on January 6. This time, Internet services throughout Kazakhstan are being affected.

⚠️ Confirmed: #Kazakhstan is again in the midst of a nation-scale internet blackout as of early morning Thursday.

While service was available, President Tokayev gave a televised speech appealing to Russia for assistance to 'protect the state.'

According to Cloudflare, the traffic of Tele2 and Kcell, which are service providers in Kazakhstan, has decreased significantly since 16:00 on January 4, and it did not reach zero at this time, so communication is severe rather than completely blocked. It is thought that it was only squeezed, but it is said that it is in a completely 'communication cutoff' state on January 6th.

You can also see it on Cloudflare Radar. 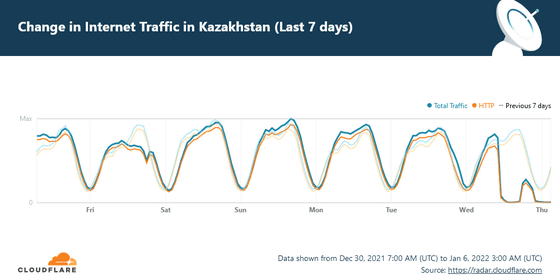 President Tokaev tweeted that the government will limit the gas price to 2021 level 1 liter 50 tenge (about 13 yen) in order to eliminate the turmoil.

Also, in response to a call for help from President Tokaev, it has been decided that a peacekeeping force will be dispatched from the Collective Security Treaty Organization (CSTO) led by Russia.