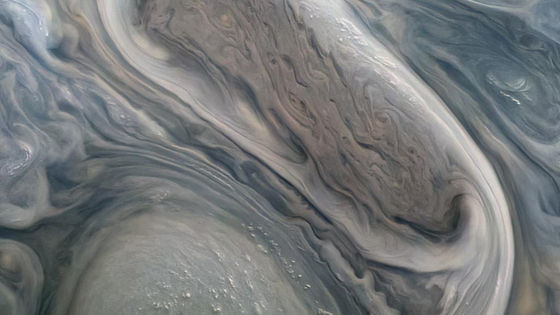 On December 17, 2021, NASA released 'Ganymede Sound,' which is a conversion of electromagnetic wave data recorded when the Jupiter probe 'Juno ' passes near Jupiter's moon Ganymede. This observational data is important for understanding Jupiter's extreme magnetic field and how it acts on Jupiter's largest moon.

The 'Sound of Jupiter's moon Ganymede' released by NASA is as follows.


The electromagnetic wave data that is the source of this sound was observed by the Jupiter probe Juneau as it passed through the magnetosphere of Ganymede on June 7, 2021. At this time, Juneau was approaching 645 miles from the surface of Ganymede, which was the moment when NASA's Jupiter probe Galileo approached Ganymede in May 2005. ..

'This voice is a wild sound that makes you feel like you're riding in Juneau as you pass by Ganymede,' said Scott Bolton, senior researcher at Juneau Mission. You can see that the sound is rapidly changing to high frequencies, which indicates that Juneau has entered a new region of Ganymede's magnetosphere. '

Juneau investigated not only Ganymede, but also the mysterious paranormal phenomenon 'paranormal' on Jupiter's equator by mapping the magnetic distribution of Jupiter. This large blue spot, which cannot be seen with a telescope, moves eastward at a speed of about 4 cm per second against the surrounding flow, and it takes about 350 years to orbit Jupiter. On the other hand, the Great Red Spot, which is also just below Jupiter's equator, is moving westward and will go around Jupiter in about four and a half years. 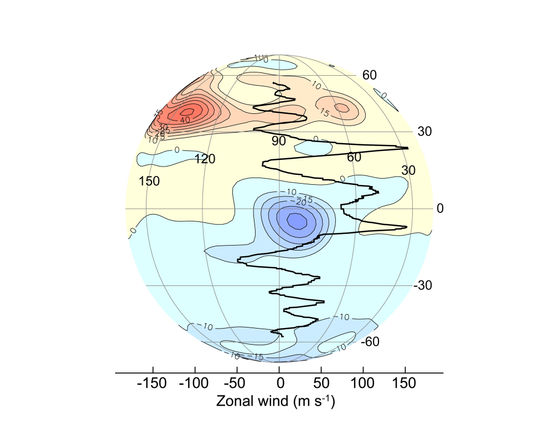 This new magnetic field map also shows that Jupiter's jet stream, the 'belt-like wind,' is driving the large blue spots. This seems to indicate that the band-like wind observed on the surface of Jupiter reaches deep inside the gas giant planet.

In addition, Juneau's observations have shown that the vortices observed on Jupiter are very similar to the vortices of the Earth. Of the following, the left is a photograph of phytoplankton that occurred in the Norwegian Sea, and the right is an image of Jupiter's turbulence. The vortex generated on Jupiter is so large that it cannot be compared with the Earth, but it is expected that the mechanism of the Earth's meteorological phenomenon can be elucidated by investigating the function of Jupiter's atmosphere that forms this vortex. It is about.