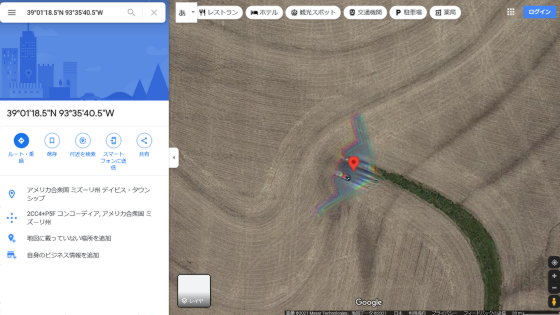 Google Maps allows you to see

aerial photo views generated from multiple aerial and satellite photographs, sometimes with strange objects such as 'Kazakhstan's Mysterious Five-Pointed Star ' and ' Romanian UFO'. It is discovered and becomes a hot topic. A new user of the overseas bulletin board Reddit has pointed out that 'a stealth bomber in flight is reflected in Google Maps ' and is calling attention.

You can see the 'in-flight stealth bomber reflected in Google Maps' pointed out by Reddit user Hippoowned in the embedded map below. The place where the picture was taken is Davis Township in Caldwell County , Missouri, USA, and it seems that fields are spreading around it.


This is an enlarged image of the stealth bomber. The picture was taken of the B-2 Spirit, which is very expensive and only 21 are produced. This satellite image was taken by an artificial satellite of Maxar Technologies , a space development company headquartered in Colorado, USA, and although the outline is blurred, it firmly captures the appearance of the B-2 spirit exceeding 1000 km / h. increase. The reason why there are red, green, and blue blurs throughout is that the artificial satellite does not collect light with a sensor and takes a picture, but measures the intensity of the wavelength of light such as red, green, and blue. , It is because they are combined to generate an image. Passenger planes shot over the United Kingdom in 2017 also have red, green, and blue blurs throughout for the same reason.

In addition, you can check how the B-2 spirit actually flies in the following movie.