At the private event 'Snapdragon Tech Summit 2021 ' held by semiconductor maker Qualcomm for two days from November 30, 2021, we announced 'Snapdragon 8 Gen 1 ' which will be the next generation flagship SoC for mobile. 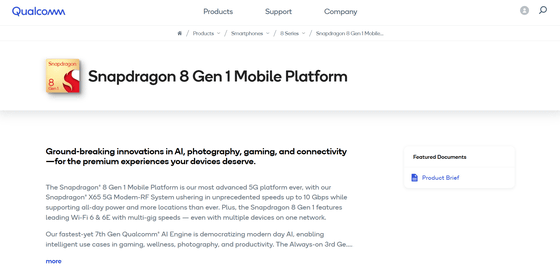 The composition comparison table with Snapdragon 888 is as follows.

The CPU of Snapdoragon 8 Gen 1 is 'Qualcomm Kryo CPU', Cortex-X2 is 1 core, high performance core Cortex-X710 is 3 cores, high efficiency core Cortex-A510 is 4 cores, as Qualcomm SoC Is characterized by being equipped with three types of Armv9 architecture cores for the first time. The Cortex-A510 shares two L2 caches with four cores and has been redesigned from the previous model. Qualcomm states that the adoption of the Cortex-X2 has improved performance by 20% and power efficiency by 30% over its predecessor.

Also, the GPU uses the same Ardeno architecture core as the previous model, but it is named 'Qualcomm Adreno GPU' and numbering is eliminated. Hardware news site AnandTech predicts that the microarchitecture may be about to shift significantly from the previous Adreno series. In addition, GPU performance is improved by 30% from the previous model at the peak, and power efficiency is also improved by 25%. Qualcomm claims that the Snapdragon 8 Gen 1 is the first Qualcomm SoC to run the game engine Unreal Engine 5. And the ISP involved in image processing taken with the smartphone camera supported 14-bit color depth input per channel in the previous model, but now it can support 18-bit input in Snapdragon 8 Gen 1. Is a big point. By increasing the corresponding color depth input, it is possible to shoot with a

wider dynamic range. Also, the capture speed has improved from 2.7 gigapixels per second on the Snapdragon 888 to 3.2 gigapixels per second on the Snapdragon 8 Gen 1. Furthermore, it is possible to shoot with 8K HDR and 64 million pixels, but the codec has not changed from the previous model, and the AV1 codec actively adopted by YouTube and Netflix has not been added. Qualcomm states that AI performance has doubled compared to its predecessor, improving the performance of larger machine learning models, and power efficiency is '70% better than its peers.' doing.

The modem chip is the 4th generation 5G modem ' Snapdragon X65 ' announced by Qualcomm in February 2021 and is the first in the world to support 3GPP Release 16. In millimeter waves, it is possible to communicate in the 1000MHz band with 8 carriers or 2x2 MIMO , and in the sub 6GHz band with 4x4 MIMO in the 300MHz band, and a maximum downlink communication speed of 10Gbps has been realized.

According to Qualcomm, it has already been decided to be adopted for smartphones such as Xiaomi, ZTE, Sony, Sharp, etc., and it is expected to be announced sequentially from the end of 2021.