I tried to summarize the advertisements of the 1970s and 1980s that casually promoted cocaine suction goods such as razors and straws. 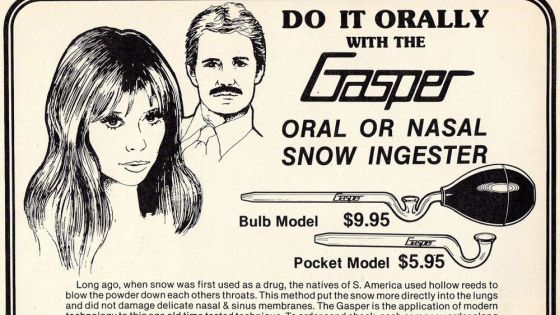 Rare Historical Photos, a website that collects and publishes rare images, publishes a large number of 'advertisements that casually promote cocaine-related goods' created in the 1970s and 1980s. It was a content that I could feel how cocaine had spread to the general public in the United States at that time, so I summarized some.

Back when it was normal to advertise cocaine gadgets in magazines, 1970-1980 --Rare Historical Photos

When watching American gangster movies, I often see scenes of 'powdering a mass of cocaine with a razor and sucking it through the nose with a straw-like object.' In the United States from the 1970s to the 1980s, cocaine suction goods such as razors and straws were widely published in magazine advertisements. For example, the product named 'Sno-Blo' below is 'a device for cleaning the nose after inhaling cocaine.' Although there is no word 'cocaine' in the introductory text, you can see that products that anyone can see as cocaine-related goods were casually promoted. Below is an ad for a razor made of 22 gold. The manufacturer that sells this razor also handles products such as 'COKE BOOSTER' and 'GRASS BOOSTER'. Below is an ad for the Coca Booster and Glass Booster. Apparently it's a product that removes moisture from coca (cocaine) and glass (cannabis jargon). A device that injects 'snow' (cocaine's jargon) directly into the lungs without damaging the nose. There are two types in the lineup, 'valve model' and 'pocket model'. A 100% steel cocaine crusher that is said to be 'better than a razor'. I think it's an ordinary nasal wash, but there is a mysterious white powder in the background. 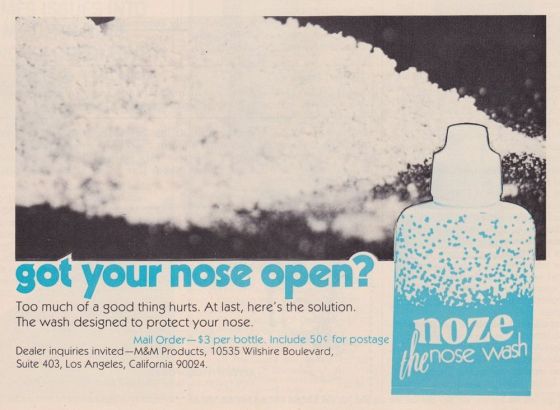 'D-HYDRO BOTTLE' that appeals the effect of removing moisture from cocaine. The dehumidification system is 'scientifically guaranteed to be effective.' This is also an advertisement promoting 'D-HYDRO BOTTLE'. In the above advertisement, the notation 'cocaine' is used by blurring cocaine, but this advertisement says 'removes all moisture from Cocaine' without using slang. When inhaling cocaine, it was common to use a razor or the like to place the powder on a line and inhale it with a straw. If you use a straw 'HOOTER' that has a shape similar to this vacuum cleaner, you can inhale all the cocaine powder placed on the line. This is a goods made of

14K gold and sterling silver. In addition to suction goods such as straws and razors, we also have a lineup of 'leaf-shaped accessories' of unknown use. 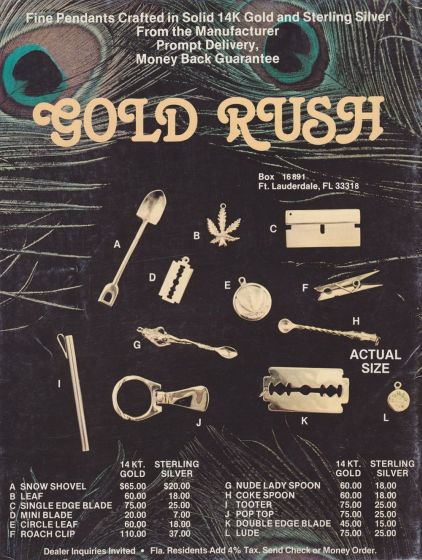 When sucking cocaine, a smooth, flat plate-like object such as a mirror was used as a base to suck in cocaine thoroughly. The following plates are also probably sold as a base for crushing cocaine, each with a string such as 'snow', 'COCAINE', 'C 17 H 21 NO 4 (chemical formula of cocaine)'. It has been. The above ads are part of the ads published by Rare Historical Photos, and you can find many other ads for cocaine-related goods on the following pages.

Back when it was normal to advertise cocaine gadgets in magazines, 1970-1980 --Rare Historical Photos
https://rarehistoricalphotos.com/cocaine-paraphernalia-ads-1970s/ The possession and sale of cocaine is prohibited by the Narcotics and Psychotropics Control Law , and possession alone may result in imprisonment of up to 7 years.