Why are car thieves aiming for catalytic converters? 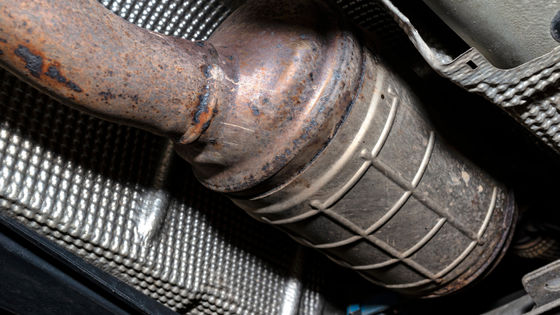 The car is equipped with a device called

Catalytic converters that purify carbon monoxide and nitrogen oxides have reduced their emissions by more than 80% since they were introduced in the 1970s. However, the catalytic converter contains precious metals such as platinum, iridium, palladium, and rhodium, and it is a fact that thefts aimed at these are occurring one after another. The Hustle reports that this type of theft has increased more than 11-fold over the past few years. The Hustle cites soaring prices for precious metals as to why theft has increased. The price of rhodium, which was about 2,000 dollars (about 220,000 yen) per ounce (about 28.35 g) around 2018, temporarily rose to nearly 30,000 dollars (about 3.3 million yen) in the next three years. At the same time, the price of palladium has more than tripled.

Due to the shortage of supply of these precious metals, catalytic converters have become popular in the recycling market. According to The Hustle, although there are differences depending on the car manufacturer, each catalytic converter can be sold at a price of $ 25 (about 3,000 yen) to $ 2,000 (about 228,000 yen) or more. Many recyclers require you to show your ID at the time of purchase, so thieves who want to avoid this are sold to intermediaries. The Hustle points out that the intermediary has created a cycle in which these are collectively sent to a metalworker who extracts precious metal parts, and a metalworker sends them to a smelter who extracts precious metals. 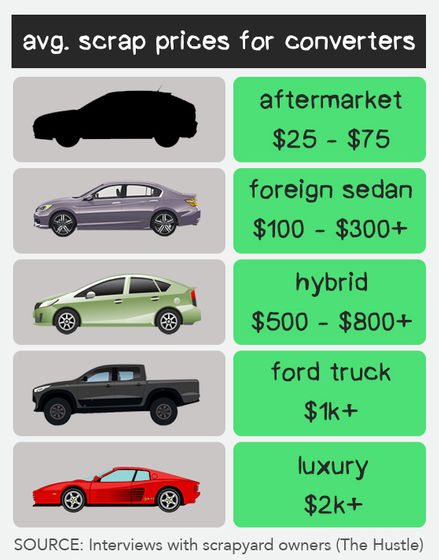 The Hustle says that victims whose catalytic converters are stolen can cost $ 500 to $ 3,000 to repair, and due to the supply shortage problem mentioned above, parts It is pointed out that it currently takes more than two months to procure. He also noted that anti-theft device sales have doubled in the past year, warning that 'more thefts could occur as precious metal prices continue to rise.' ..