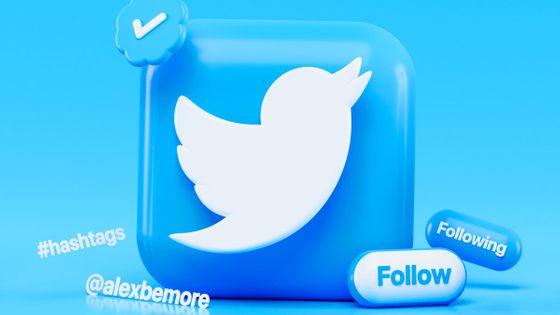 Twitter announced its financial results for the third quarter of 2021 (July-September) on October 26, 2021. Although there were concerns about the impact of Apple's privacy enhancement function ' App Tracking Transparency (ATT) ' introduced from iOS 14.5 on advertising revenue, Twitter's third quarter revenue increased 37% year-on-year to 1,284 million. It has reached the dollar (about 146 billion yen).

Twitter shares rise after company says Apple privacy changes had less of an impact than expected on third-quarter results
https://www.cnbc.com/2021/10/26/twitter-reports-third-quarter-revenue-growth-of-37percent-and-says-apple-changes-had-minimal-impact.html

Twitter's total third-quarter sales reached $ 1.284 billion, up 37% year-over-year, reflecting strong performance in key products and regions. While total sales increased, operating income was $ 56 million (approximately ¥ 5.9 billion) in the same period of the previous year, while operating loss was $ 734 million (approximately ¥ 84.8 billion) in the current fiscal year. The operating loss included $ 766 million in costs related to a class action filed in 2016 that 'misunderstood investors about the outlook for corporate growth,' and continued business. Investor is included, and it is said that it will be an operating profit of 23 million dollars (about 2.6 billion yen) excluding litigation related expenses.

Total ad revenue was $ 1.14B, + 41%. While y / y growth for Q3 ad revenue slowed vs. Q2, it was the strongest y / y growth in Q3 reported in the last 3 years, even when taking into account the recovery in ad spend we saw in the year ago period after the initial COVID impact. $ TWTR

The average number of daily active users that generate revenue was 211 million, an increase of 13% year-on-year. Of the 211 million people, 37 million are American users and 174 million are outside the United States.

Twitter's total revenue and advertising revenue amounts in the third quarter were in line with analysts'preliminary forecasts, but daily active users fell short of analysts' forecasts of 211.9 million. Following the announcement of financial results for the third quarter, Twitter's stock price rose 4% in after-hours trading on October 26th.

Regarding Twitter's performance in the third quarter of 2021, there were concerns about the impact of Apple's ATT, which allows users to limit tracking for advertising purposes, but the impact of ATT on Twitter was only minor. matter. Regarding the reason why ATT had a serious impact on Facebook etc. but Twitter did not suffer so seriously, Twitter said that the influence of ATT may differ between advertising platforms depending on the combination of ad formats and elements. I'm guessing.

The rev. Impact we experienced from AppTrackingTransparency (ATT) in Q3 increased on a sequential basis but remained modest. The impact of ATT is likely to vary across ad platforms given the unique mix of ad formats, signal, & remediations on each, as well as other factors. $ TWTR

While it's too early to assess the long-term impact of ATT at this point, we estimate that the impact on ATT's earnings at least in the third quarter will be smaller than expected and will continue to be minor in the fourth quarter. increase.

It is still too early for Twitter to assess the long-term impact of Apple's privacy-related iOS changes, but the Q3 revenue impact was lower than expected, & we have incorporated an ongoing modest impact into our Q4 guidance. $ TWTR

In addition, Twitter has a function that allows you to log in with your Google account or Apple ID in the third quarter, and a monetization function for creators such as 'Super Follow', 'Ticket system space' , and 'Tips' that allows you to throw money ...

In Q3 we launched three new monetization products for creators: Tips, Super Follows & Ticketed Spaces. We also started to roll out Communities, an easy way to find & connect with people who have similar interests. $ TWTR pic.twitter.com/X7BDLTGcUm

It mentions that it has released features such as automatically blocking harassing users.

On health, we shipped a number of product improvements in Q3 — including Safety Mode, a new feature that aims to reduce disruptive interactions by temporarily blocking accounts for using potentially harmful language or sending repetitive & uninvited replies or mentions. $ TWTR pic.twitter. com / OF9uJCG1gO

Our outlook for Q4'21, which includes MoPub, is as follows: