Apple fixes a vulnerability in iOS 15.0.1 that could bypass the lock screen, but points out that it hasn't paid a bug bounty 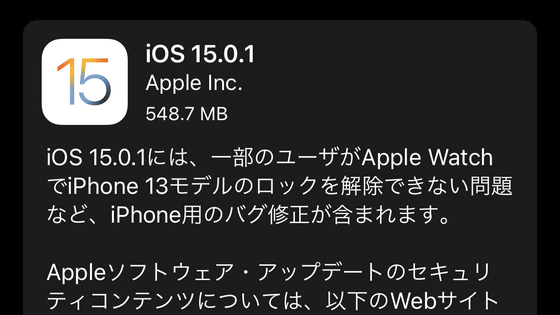 On October 1, 2021, local time, Apple released iOS 15.0.1. Some bug fixes have been made in iOS 15.0.1, but other bugs not officially mentioned have also been quietly fixed, and this quietly fixed bug has been reported to Apple's bug bounty program. It has been pointed out that it was left unattended without payment of bounties.

Regarding iOS 15.0.1 released by Apple on October 1, 2021, Apple mistakenly said 'IPhone 13 model' Unlock iPhone on Apple Watch 'may not work' and 'Settings' App It reports that it has fixed two issues that may cause a 'low free space' warning.

However, in reality, security researcher Jose Rodriguez released it to the public on September 22, 2021, using the VoiceOver function and sharing tools to 'make the iPhone a memo app without unlocking it.' It became clear that the 'vulnerability that makes it accessible' has also been fixed. Rodriguez had reported the vulnerability to Apple before it was released to the public, but the vulnerability remained unfixed and no bounty was paid, so the day after iOS 15 was released. He explained that he decided to make it publicly available.

Immediately after the release, 'iOS 15' discovers a vulnerability that allows access to the contents of memos by bypassing the lock screen --GIGAZINE The vulnerability sent to Apple's Bug Bounty Program turned out to be unfixed for half a year, and the discoverer published a zero-day vulnerability as 'disappointed'-GIGAZINE