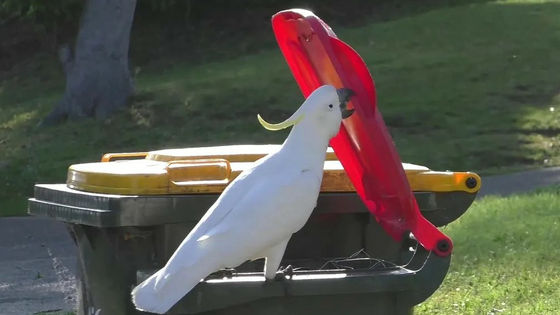 It is reported that wild Kibatan (Cacatua galerita) has begun to 'open the lid of the trash can' in southern Sydney, Australia. A new treatise published in science, a major academic journal, describes this seemingly simple act as 'an example of parrots being culturally evolving.'

Innovation and geographic spread of a complex foraging culture in an urban parrot | Science
https://science.sciencemag.org/content/373/6553/456

Clever cockatoos in southern Sydney have learned to open kerb-side bins — and it has global significance
https://theconversation.com/clever-cockatoos-in-southern-sydney-have-learned-to-open-kerb-side-bins-and-it-has-global-significance-164794

Cockatoos in Australia Are Teaching Each Other How to Loot Trash Cans
https://www.sciencealert.com/clever-cockatoos-have-learnt-and-spread-a-culture-of-trash-bin-looting

Kibatan is a large parrot with extremely high intelligence and abundant curiosity, characterized by an eye-catching yellow crest. While Kibatan is loved as a pet because of its intelligence, it is treated as a pest because of the overgrowth of wild populations in Australia.

In recent years, it has been reported one after another in Australia that this Kibatan 'opened the lid of the trash can and began to fish the contents.' The actual video is below.


In the video below, the weight placed on the lid is also dexterously removed to open the lid.


Barbara Crump and colleagues at the Max Planck Institute in Germany noted that reports of 'Kibatan opening the lid of a trash can' date back to 2014 near Sydney, Australia, and the behavior in question among Kibatan. I investigated how it spread.

As a result of continuous interviews with 478 residents living in the suburbs of Sydney, 338 out of 1396 reports reported that they had seen Kibatan opening the trash can lid. Interviews prior to 2018 found that reports of 'I've seen' were limited to three locations on the outskirts of Sydney, which were quite far from each other, but in 2019, 'I've seen them.' The number of areas reporting 'yes' has increased rapidly to 41. Regarding the above report of 'opening the trash can lid' in Kibatan, Australia, research team John Martin explained that 'it is important to show that animals showing social learning can be observed in daily life.' .. He said that he reaffirmed the idea that 'non-human species may also be culturally diverse,' which was said to have appeared in the scientific community in the 1950s.