Asian elephants living in India and Southeast Asia behave as if they were saddened by 'carrying dead children for days to weeks'. It turned out in. Knowing the reaction of Asian elephants to the deaths of their peers and children can have a significant impact on the protection of elephants.

Therefore, Sanjeeta Sharma Pokharel (currently the Institute of Conservation Biology at the Smithsonian National Zoo), Nachiketha Sharma (currently the Institute of Advanced Studies, Kyoto University) and Raman Sukumar (article creation) who belonged to the Indian Institute of Science at the time of research. The team at the Indian Institute of Science (at that time) focused on YouTube, where various videos about animals are posted. Search for keywords such as 'death of elephants,' 'elephant reactions to death,' and 'calf elephant death' on the platform in multiple languages, 2010-2021. We have extracted 39 videos of Asian elephants responding to the death of their companions posted in the year. Of the videos, 80% were shot of wild elephants, 16% were videos of elephants raised in zoos, and 4% were videos of elephants working in forestry or tourism.

The following video was taken by Parveen Kaswan, who actually works for the Indian Forestry Bureau, 'a close elephant carrying a dead elephant'. The corpse of a baby elephant is shown in the video, so please be careful if you are not good at it.


Other videos also showed elephants restless and agitated when they were near the corpse, approaching the corpse, touching it, and smelling it. Also, in the 10 videos, he was lifting, gently moving, and shaking as if he was trying to revive his dead companion.

Brian Aucone of the Denver Zoo, who wasn't involved in the study, said, 'Elephants, like us, are trying to cling to the corpse and keep track of what's happening. I think it's happening. '' We've seen this kind of behavior several times before, 'he said. At the zoo, when elephants are euthanized due to illness or weakness, staff say they will give their companions a chance to say goodbye to the dead elephants, and the remaining elephants will smell the corpse and snuggle up to the torso. increase.

Elephants are not the only animals that respond to the deaths of their peers and children, and in the past it has been confirmed that orca mothers carried dead babies for 17 days , and monkey mothers carried corpses of children. It may continue to be carried for weeks to months . The research team points out that both elephants and primates have something in common: 'raise until the child grows up,' which may be the motivation for reacting to unresponsive corpses. Although it is difficult to know exactly why the remaining individuals react to the dead individuals and the causal relationship, some videos uploaded to YouTube may indicate that multiple animal species are aware of the death of their companions. Said that it shows. 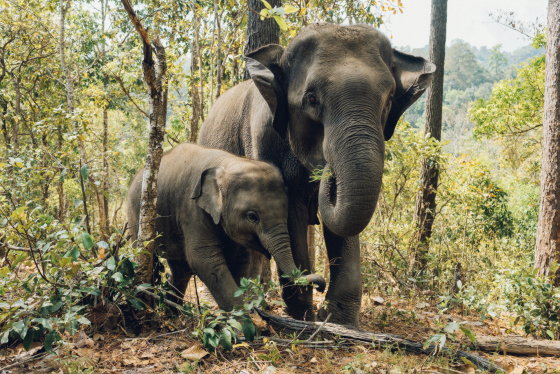