Tesla distributes the latest version of the full self-driving function 'FSD Beta 9', but behavior problems such as 'Pushing into a lane with a parked vehicle' are reported In July 2021, Tesla distributed the latest update to its full self-driving (FSD) capabilities, FSD Beta 9, to beta testers. It was an update that enabled autonomous driving on streets and intersections, but some users and the American consumer information magazine Consumer Reports (CR) reported that 'there are still safety issues.' ..

Many bugs in FSD Beta 9 have been reported on Twitter and online forums. The following movie was taken using FSD on a congested road, and you can see how it runs on the road and turns at an intersection without any problems.

Someone said they wanted to see FSD Beta 9 in heavy traffic.

Have fun, it's all yours. $ TSLA pic.twitter.com/lhdgaMtGzi

However, in a video taken by another user, you can see that the self-driving car does not recognize the monorail stanchion in the center of the road and is about to hit it many times.

2nd: The car doesn't recognize the monorails in the middle of the street and drives towards it! Pic.twitter.com/SpxponRofW

In addition, there are scenes where you try to forcibly cut through the center line to change lanes ...

7th: It decides to go in one lane and then it figures out that it needs to go to the other lane but that's too late pic.twitter.com/g6KPanGxFz

After turning an intersection, there are also scenes where a parked vehicle tries to plunge into a lane.

9th: It turns left but it goes to a lane that is not supposed to pic.twitter.com/RVBEfErdM3

Tesla's FSD has been updated several times since its first beta distribution in October 2020. However, including the FSD Beta 9 distributed this time, truly fully autonomous driving has not been realized, and it still requires driver monitoring while driving.

CR said that Tesla is using users to beta test new features on public roads, saying, 'Tesla's tests like this are with companies that monitor private roads and trained drivers, such as Argo AI and Waymo. Is in contrast. ' A traffic safety expert also said, 'We are unaware that drivers and pedestrians other than Tesla cars on the road are participating in the experiment without consent.'

22,000 yen per month is required to use Tesla's full self-driving function-GIGAZINE 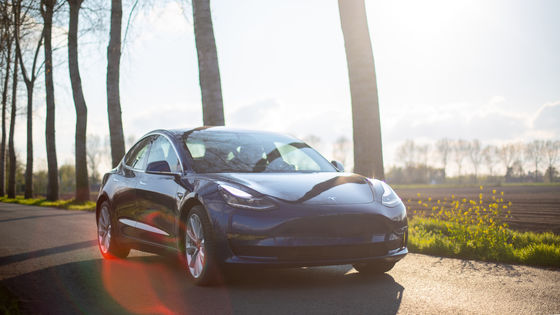 Also, to enable the FSD feature on Tesla cars, you had to choose a car with the autopilot feature as standard, or buy dedicated hardware for $ 1,500. However, the update price of the dedicated hardware has been reduced to 1000 dollars (about 110,000 yen) in response to the backlash from some users who purchased the vehicle thinking that 'it can be upgraded for free like the previous version'. I will .