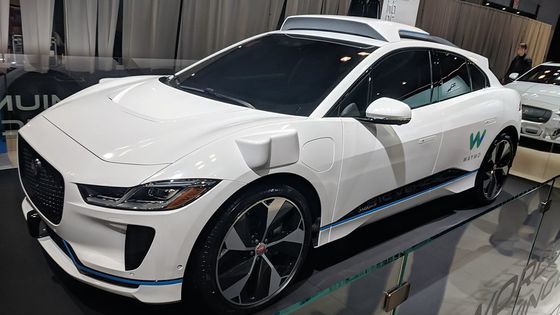 Waymo , a self-driving car developer under the umbrella of Google's parent company Alphabet, is focusing on simulations in a virtual space named 'SimulationCity ' to improve its self-driving system. Waymo's efforts to utilize such Simulation City are reported on Waymo's official blog and The Verge, an overseas media that received information on Simulation City exclusively from Waymo.

Welcome to Simulation City, the virtual world where Waymo tests its autonomous vehicles --The Verge
https://www.theverge.com/2021/7/6/22565448/waymo-simulation-city-autonomous-vehicle-testing-virtual

Tesla, led by Elon Musk, is evolving the self-driving function 'Autopilot' with data collected from Tesla cars running all over the world, but in contrast, Waymo owns only about 600 actual vehicles. .. Waymo's self-driving vehicles run in parts of Arizona and California in the United States, and there are also some manually driven vehicles that collect mapping data in Los Angeles.

Unlike Tesla, Waymo uses a method of testing self-driving cars by simulating virtual space, rather than using real-world data to develop self-driving functions. Waymo has been using simulation software called 'CarCraft ' since 2017, and has traveled at least 5 billion miles (about 8 billion km) in virtual space. However, according to Waymo's senior product manager Ben Frankel, CarCraft had a problem with its ability to simulate new vehicles and options.

That's why Waymo has developed a new simulation software, 'Simulation City,' and is testing the Waymo Driver to meet all the challenges of public roads. SimulationCity can run a fully autonomous vehicle with the Waymo Driver in virtual space to simulate a 20-minute drive across the streets of San Francisco and an 11-hour drive from Phoenix, Arizona to Dallas, Texas. It seems possible.

Unlike Tesla, which deploys electric vehicles and collects large amounts of data from real vehicles, simulation is an important factor in the development of self-driving cars for Waymo, which has limited real-world service deployment. Through SimulationCity, Waymo engineers can extensively test common driving scenarios and dangerous safety scenarios and apply what they learn to real vehicles.

Simulation software can collect incomparably large amounts of data compared to those collected by vehicles on public roads, without being bound by real-world constraints. As of 2020, the distance that the vehicle using the Waymo Driver ran on public roads was about 20 million miles, but it is said that it has already run a distance of 15 billion miles (about 24.2 billion km) in virtual space. SimulationCity is built using more than 20 million miles of driving data collected by Waymo Driver-equipped vehicles in the real world, driving behavior data of third-party companies, advanced simulation technology and machine learning, and Waymo is virtual. The Verge reports that he is confident in the effectiveness and reliability of situations that are reproduced in space.

SimulationCity is capable of reproducing more detailed virtual situations than traditional CarCraft, and Waymo engineers are able to reproduce complex things such as small raindrops falling on vehicles and roads and bright sunlight that illuminates the surroundings in the evening. It seems that you can simulate up to. It is known that these situations confuse the sensors of self-driving cars, and it may cause problems such as reading traffic lights.

Further, Waymo is to the image of the virtual space in real, combining data and artificial intelligence in the real world that automatic operation vehicle collects 'SurfelGAN (of Surface element GAN / surface element hostile generation network technology called)' , Generating video in virtual space. If you click the image below, you can see the GIF movie (about 25MB) of the real world image on the left half and the image generated by Surfel GAN on the right half. 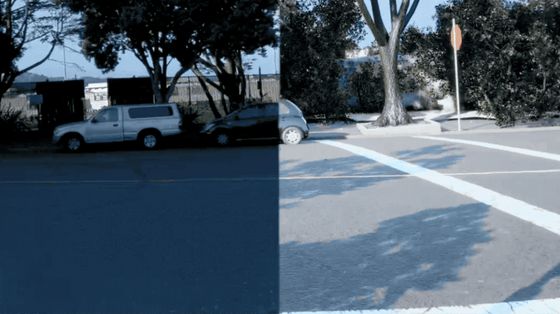 Regarding the development of autonomous driving technology using such virtual space, Huei Peng, a professor of mechanical engineering at the University of Michigan, said, 'If you use defective data, the simulation results will be useless.' Pointed out that there is. Frankel, on the other hand, claims that Simulation City is steadily improving in maturity.

Waymo is cautious about deploying the fully unmanned taxi Waymo One , and is refraining from launching services in San Francisco and elsewhere until it is confirmed that it can handle complex urban environments. Frankel said SimulationCity can help improve the maturity of the Waymo Driver and prepare for future large-scale rollouts of the service.