Anyone can get super-hearing | Aalto University
https://www.aalto.fi/en/news/anyone-can-get-super-hearing

The device developed by Mr. Purki is as follows. Six high-sensitivity microphones that can pick up ultrasonic waves are built in the light green spherical part, and the sound picked up by the microphone is immediately pitch-shifted to the human audible frequency by a computer connected by wire. It will be played on headphones. In addition to pitch shifting, the computer also analyzes the direction in which the sound is emitted, so it is possible to clearly see where the bats are, Mr. Purki said. If you watch the following video through headphones, you can hear the ultrasonic waves emitted by the bats.


According to Mr. Purki, the white dots moving to the left are probably bats. Although there have been devices that can hear the ultrasonic waves of bats, it was unknown where the sound came from. 'Currently, pitch shifting is performed on a computer, but in the future it may be possible on an electronic device attached to headphones.' 'With this device, normal hearing such as gas pipe leaks can be performed.' It is possible to identify ultrasonic waves that cannot be detected with. ' 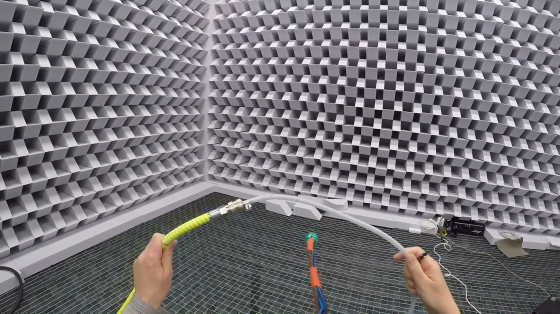