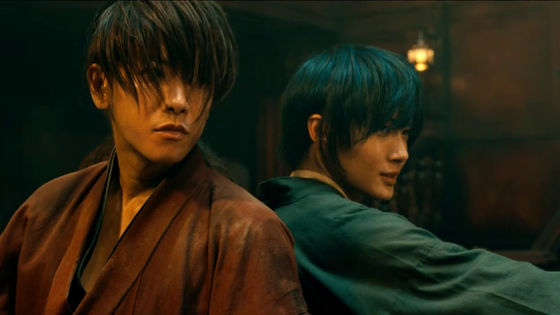 If you download the data in advance via the dedicated application 'HELLO! MOVIE', the movie sound will be recognized and the sub sound will be automatically played along with the video, and Kenshin Sato, who plays the role of Kenshin. Mr. Keishi Otomo, the director and screenwriter, and Mr. Kenji Tanigaki, the action director, will tell you everything. The sub-audio screening will be held from May 22nd (Sat) for 'The Final' and June 19th (Sat) for 'The Beginning'. In addition, in the 'Phenomenon Edition' released as a new 30-second spot, the appearance of Sojiro Seta played by Ryunosuke Kamiki has been lifted for the first time.

The movie 'Rurouni Kenshin Final Chapter The Final' is showing a big hit in the 30-second spot (phenomenon edition)! --YouTube

It is cheaper to go around the African continent than to cross the Suez Canal due to too low fuel, and the traffic volume will decrease sharply --GIGAZINE

It is confirmed that the new coronavirus is transmitted from cat to cat, and since there are no symptoms, it may become a 'quiet intermediate host' --GIGAZINE

Development of a titanium supersonic passenger aircraft flying at Mach 5 has started, and if it is put into practical use, it will be possible to cross the Atlantic Ocean in 90 minutes --GIGAZINE

Mr. Buzz Aldrin who walked the moon stated that 'If you want humanity to reach Mars, you should retire the International Space Station' --GIGAZINE

I just ate dinner, but I'm already standing on an automatic feeder. I feel fast (; ゜ 0 ゜) pic.twitter.com/PFxdy9c1OD

'The remodeling shop had me replace the sink in the kitchen, and I rubbed it because the left and right sides were wrong. It means that I can't fix it. What should I do? I have already paid. I have no regrets. ' Pic.twitter.com/1ec5xayfIB

Once you take your eyes off, I made a lid holder for the cup noodles that makes you feel like 'Wow!' .. .. pic.twitter.com/NFb7lURhm2

Both the rocket shooting side and the intercepting side enter the angle of view at the same time, which is unrealistic pic.twitter.com/Qp2ge4oJgZ

Submitted 'Request to cancel the Tokyo Olympics and Paralympics to protect people's lives and livelihoods' addressed to the Governor of Tokyo at 10:30 am based on the online signing activity on Friday, May 14th. Then, from 11:15 am, we held a press conference at the Tokyo Metropolitan Government Press Club. We sent the request to the IOC / IPC by email and mail. pic.twitter.com/QdpRbi0Ocd

The effect of the declaration cannot be seen, and the number of people is increasing again. Governor of Tokyo 'Severe' [New Coronavirus]: Asahi Shimbun Digital

Information BOX: Jerusalem clash, why it developed into a large-scale battle in Gaza | Reuters

Prime Minister Suga 'I am also shocked' Delayed completion of inoculation for the elderly-New Corona: Jiji.com

'Is the Tokyo Olympics KO?' On the front page of the French newspaper Criticism of the Japanese government's measures against corona | Kyodo News

[Handling of surplus vaccine]
In Sanjo City, if there is a surplus of vaccine due to cancellation on the day of inoculation or no show, we are preparing a system to contact elementary and junior high schools and have pre-registered faculty and staff go to the inoculation site to receive the vaccine. I will.

We give top priority to preventing vaccine disposal regardless of the age of faculty and staff.

What surprised me recently. A way to deal with 'people who tend to get nervous' is to make them 'hand-shaped' as shown in the picture. If you can, please try it now. Do you see that it 'changes to abdominal breathing without permission'? You can take a deep breath without being aware of it, and you can make a voice out of your stomach. 'From Mr. Shigemitsu Hayashi, a vocal technique researcher' Special Thanks: @bochibochigonta pic.twitter.com/sLe4EOnNls

Egg words in the magazine when I opened it after a long time pic.twitter.com/I1SxxclMP6

This collection of short stories is dangerous. It's too amazing. The first 'dimension' is the story of a woman whose three beloved daughters were killed by her husband, but as we read on, our morals were gradually dismantled, leading us to an unusual situation that even understood the murderer. Turns suddenly and ends suddenly.

What is life / what is right and wrong? I was at a loss when I was left in the middle of the question. It's too amazing. pic.twitter.com/RqYtS0UBvi

As a medical professional, I was not good at explaining the end of the second inoculation of the Konavirus vaccine the other day, so I summarized my remarks. There are individual differences in the side reactions, but I would appreciate it if you could read that I was somehow like this. Let's all live and meet in the near future! !!

I would like the staff of the medical center at the vaccination site and the people at the government office to vaccinate as soon as possible. https://t.co/vj9SB5e1wo

How to use GNU Make --Speaker Deck

[Special feature] Why is 4GB of memory useless? Confront with an 8GB PC. Comparison and verification of speed difference when using Windows with video --PC Watch


TV Anime 'How Not to Summon the Demon Lord and the Summoned Girl's Slave Magic Ω' Non-credit OP Video | Yu Serizawa with DJ KOO & MOTSU 'EVERYBODY! EVERYBODY!'

I was addicted to crushing pot of the night shift Fitr pic.twitter.com/B2dxPpQ2Za

It's super cute to keep a few cats ...
Imagine this when you have multiple cats when you meet each other pic.twitter.com/EHg2BQGz3H

I made a symphogear kanji test pic.twitter.com/eRwrjrLNli

Sebastian and Ciel, dressed in costumes studded with episodes of the work, are the culmination of 15 years. #Kuroshitsuji Exhibition Tokyo venue admission ticket ↓ https://t.co/JYWI56GiOY pic.twitter.com/2niqrCC7jU

A story about the unexpected side of the announcer (1/5) pic.twitter.com/yElpqTeRkF

A sense of distance peculiar to a childhood friend pic.twitter.com/YNMmwtFAXm

Four creators who are closely related to the director Hiroyuki Imaishi contributed the newly drawn illustrations.

The contributed illustrations will be exhibited at the 'Hiroyuki Imaishi's World' exhibition.
Please take a closer look at the exhibition hall! #Imaishi Exhibition pic.twitter.com/DSxHUdujsU

#Shineva JA Unit 2 had two passing points where the direction was visible. One was an error that the 3D printer that output for shape examination printed out, and Anno liked it because it looked like heavy equipment. One is that I abandoned the color of JA and shook it in the military. These two were compatible. After that, I want to make my legs longer. Pic.twitter.com/ZFsWndz2f3

... is it an extension? pic.twitter.com/zPHN5FL2zL

Something is strange about your brother's attitude ... pic.twitter.com/PDtDUjMnNM

I couldn't find a good treatment method for my arms and legs, and the pictures around here are strangely numerous and disappointing. The missile launcher on the thigh remains after this, but the general who completely forgot to use it, forcibly screwed in the cut after the front and back cuts were raised, so it did not overlap with the legs that can be seen over there, and the lid on the launcher box W # Shineva pic.twitter.com/y0RMVujSHM

The new head of Unit 2 that I wanted to make it easy to understand passed through unexpectedly. However, the JA body is not decided at all. When I wasn't sure what I was doing. #Shineva pic.twitter.com/JO1NKx6lOJ

How far to update is a story about long-term titles. The general wants to put out a new mecha. However, in the survival world where Q and #Shineva have lost their industrial power, NERV has a feeling of repetition of an automatic factory, and Ville has a feeling of rushing to junk. In the first place, if I continued to insert new cards without competing with the cards I had, the frame of the story itself would be blurred and I proposed to introduce JA. pic.twitter.com/mC0hPp9Qfx

The TV version of the original JA is not my own and I have no particular feelings about it. But it might be better than pulling an unknown card out of the cuffs. Eventually, JA will become more and more heavy equipment in order to make the difference from the second machine part more and more, but at the beginning of rolling the idea, it is quite original JA pic.twitter.com/YUZciXloNb

【What day is it today? ]
Today May 14th is the 23rd anniversary of the series thanks to the release date of the first 'GUILTY GEAR'.

Thank you for your continued support of the Guilty Gear series. #GGST #Guilty Gear pic.twitter.com/YeDv2NmYsS

'The World Ends with You' Opening Trailer

Sega announces policy to scrutinize dormant IP and remaster and remake. As a reference example, names such as 'Virtua Fighter', 'Soul Hackers', and 'Crazy Taxi' are also available.

Many writers and editors do not know this system in detail. Currently, most of the designated books are BL comics, so the number of women who are interested is increasing. First of all, I would like to share what is happening and what is the problem and spread the information. https://t.co/h49M7RjgG5

'The story of mixing poison and fighting' #Creative manga (1/13) pic.twitter.com/Y1plRNhzWZ

A story of a slightly black reincarnation in another world. (1/2) pic.twitter.com/WmfuT50FEX

Empathy of Mr. Akapen who has a heavy feeling pic.twitter.com/8JYLtS8WMR

'The question is, what is this hole for?' #Sassy Sister Series Part 14 pic.twitter.com/5KqPTAdP9J

After noticing this, the three-dimensional effect of the legs improved at once! pic.twitter.com/qdniUoWyE0

A picture of the pillar of light that I drew in the past pic.twitter.com/YnbJJzOWE7

reposting for the long crop eraaa

I'm so happy I can share this one in all its vertical glory. Pic.twitter.com/Nct0n0JvLc

After all it is vertically long pic.twitter.com/C8A3OksAcf

A young lady who reigns as a big deca in TL. pic.twitter.com/2eWkBb1FVG

Creation that I want you to see vertically # New Year's pic.twitter.com/8HXTB9K7Yx

Souta Fujii's double crown reversed and heard the evaluation value of AI in the first match, 'I wonder if Katsura will surely get it ...'

Kiriyama Kudan (73), who was overwhelmed by the pointing of 'Ibushi Gin', won and decided to continue working. Uemura 5th Dan is downgraded to 6 groups.

Avoiding the retirement of the oldest active player, Kudan Kiriyama, for the second consecutive term is a secret achievement.