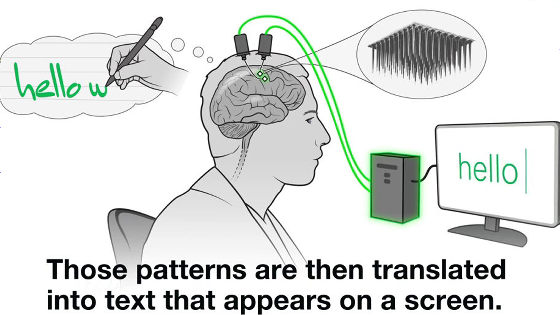 Technology has been developed that enables implants to be placed in the brain of a person with paralysis,

such as typing or operating a robot arm just by thinking. In a new research published by the research team in Nature, we succeeded in actually outputting 'handwritten characters that we imagined in our head' on the computer screen. It is believed that this promotes communication for people who cannot move their limbs.

You can see how the handwritten characters are actually output by 'just thinking' from the following movie.


A research team , including Krishna Shenoy at the Howard Hughes Medical Institute in the United States, conducted experiments with patients who were stuck with paralysis from the neck down. 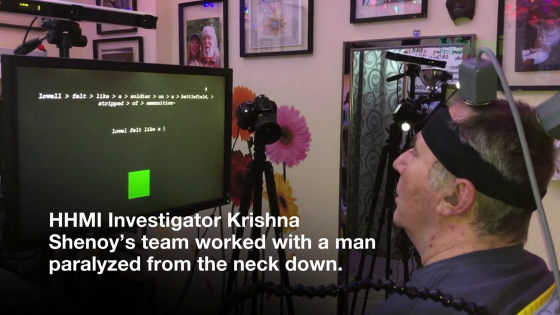 Shenoy asked the patient to imagine 'holding a pen in front of a piece of paper' and instructed him to write with an imaginary piece of paper and pen. An implant is embedded in the patient's brain, and the implant detects the activity when writing letters by imagination. The algorithm decodes and outputs the activity pattern of each character. 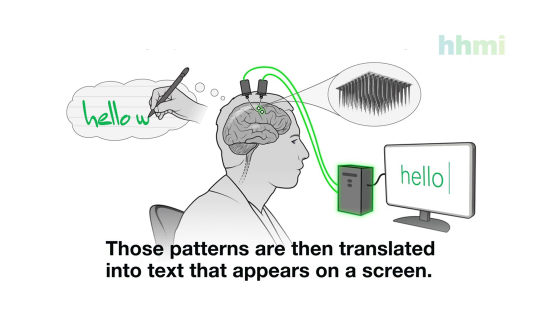 This is the screen that is actually output. The patient writes a letter in his head to the question, and the electrical signal is displayed as a letter on the screen. In the experiment, 90 characters were output per minute. So far, the research team has succeeded in an experiment in which the keyboard is displayed in front of the patient and the characters are typed. However, in the case of handwritten characters, it was possible to display the characters twice as fast as typing. 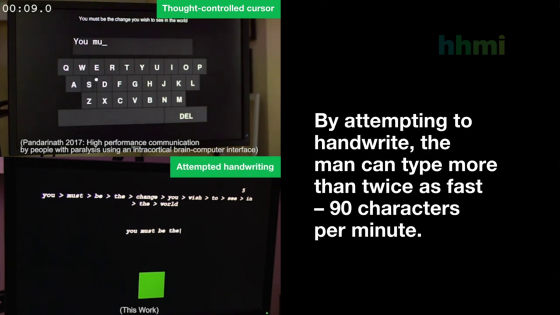 A total of 200 electrodes were installed on the two implants, but not all of these electrodes helped detect handwriting. However, some electrodes are catching electrical signals, and researchers have identified different signal characteristics for each letter. Activities for one letter are clustered, and letters with similar shapes such as 'p' and 'b' or 'h' and 'n' have also been shown to form close clusters. thing.

As a result, the accuracy of outputting the handwritten characters prepared in advance is about 94%. Also, in the case of free Q & A, the speed slowed down a little and the output was 75 characters per minute, and the error rate after automatic correction increased by 2%, but it seems that it was within the allowable range as a whole.

The system developed this time is in the experimental stage, and the researchers say that it is not a prototype. Since there was only one subject, it is unknown how much other people can use the system. On the other hand, the system has significant speed improvements and accuracy over previous implant-driven systems, and is believed to have the potential to facilitate user interaction.