Flash Player will finally be completely removed from Windows 10 Microsoft has announced that a Windows 10 update by July 2021 will completely remove Adobe Flash Player, which was discontinued on December 31, 2020, from Windows. This will allow Windows to achieve Flash Player elimination.

Adobe Flash: These updates will remove it from your Windows 10 PCs, for good | ZDNet
https://www.zdnet.com/article/adobe-flash-microsoft-lays-out-plans-to-remove-it-from-windows-10-pcs-for-good/

Adobe Flash has long been used as a standard for handling videos and games on the Internet. However, in 2015, a 'zero-day vulnerability in hacking PC controls' was discovered in Flash Player for playing Flash files.

A vicious vulnerability to hijack a PC was found in 'Flash Player', and Adobe is distributing an emergency patch --GIGAZINE 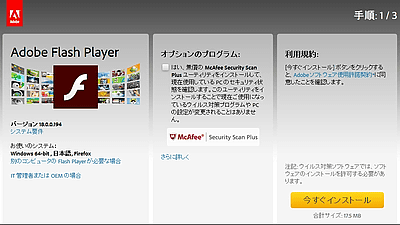 In July 2017, Adobe announced that it would stop updating and distributing Adobe Flash Player, and support for Flash Player ended on December 31, 2020. KB4577586 can be installed at any time by downloading it from the catalog.