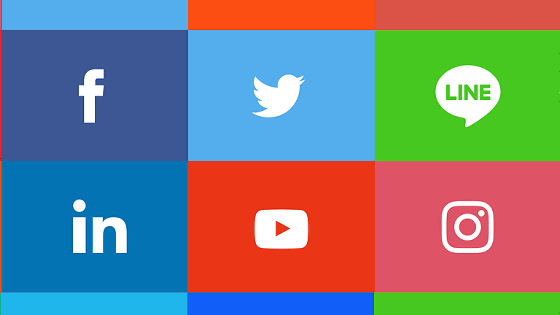 Various SNS such as Twitter, LINE, Facebook, etc. are used on a daily basis in Japan, but there are differences in the user group used for each SNS. A graph that visualizes data on what age group and gender people are using each SNS has been released, and the content is very interesting.

This data was released by edamame Japan, a marketing company that helps overseas companies expand their business in Japan. Below is a graph of the number of users of 7 SNS such as YouTube, LINE, Twitter, Facebook, Instagram, TikTok, LinkedIn, etc., and you can see that YouTube and LINE have a large number of users in Japan, which is different from other platforms. I will. 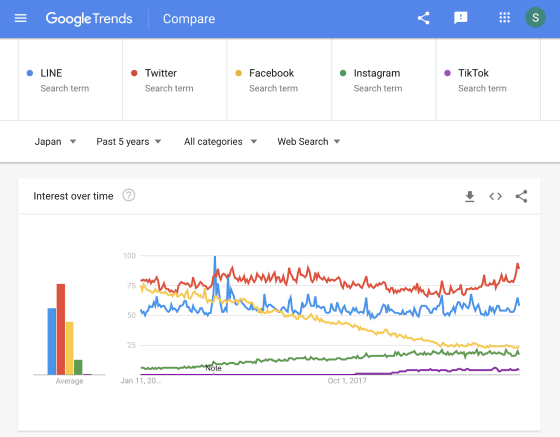 Next, the number of users on each platform is shown below by gender. There is not much difference in gender, but YouTube, Twitter, Facebook, TikTok, LinkedIn have a little more men, and LINE and Instagram have more women. LinkedIn has the largest difference in the proportion of men and women, which is believed to be because 'Japan has more men than men.' 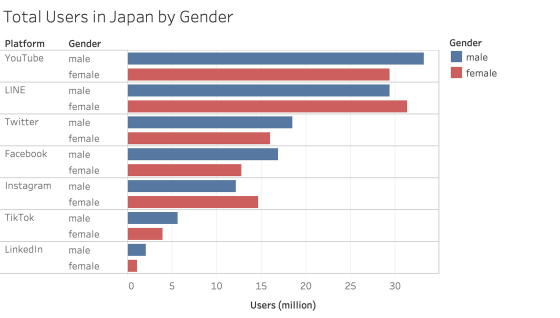 If you look at Japan's population pyramid as of 2018 before detailed data are shown, you can see that the most populous are in their 40s and late 60s. For this reason, the number of middle-aged users will naturally increase for SNS, while the distribution rate of users at each age will increase. 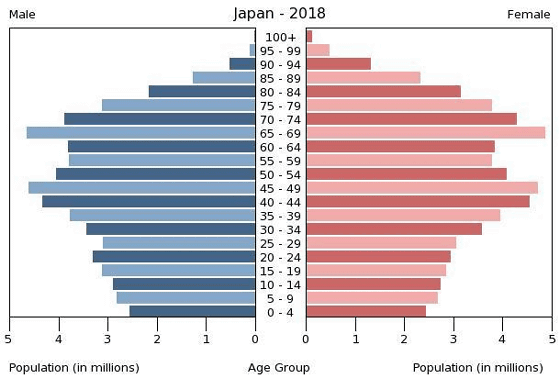 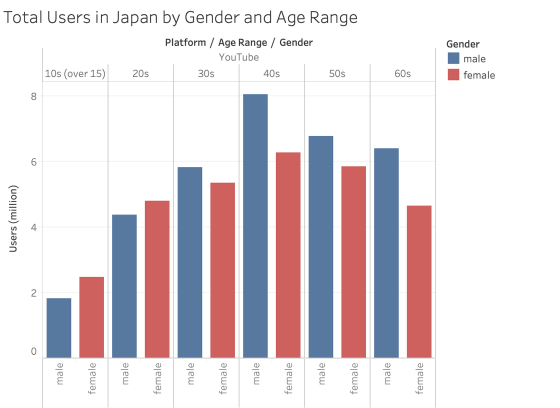 ◆ Demographics of LINE users
Most people in Japan use LINE as an alternative to email. For this reason, LINE graphs are proportional to demographics as well as YouTube. Gender differences are small, and it is considered to be the most used social media in the 60s. 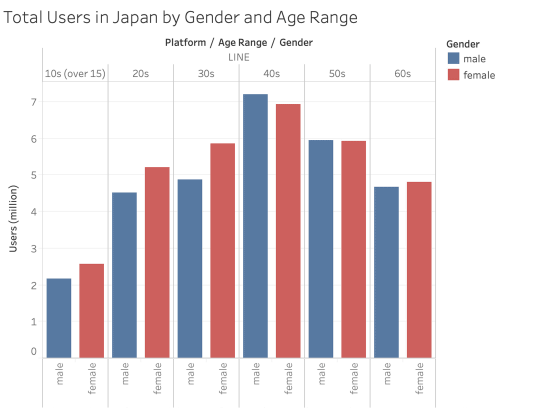 ◆ Twitter user demographics
In Japan, Twitter has the characteristic that there are many users in their 20s for both men and women. As for male users, it seems that they are often used by users in their 30s and 50s. If you are thinking about marketing for teens to 20s, Twitter is suitable, but on the other hand, the graph below does not count 'the same user who uses multiple accounts properly' as a single user. Be careful. 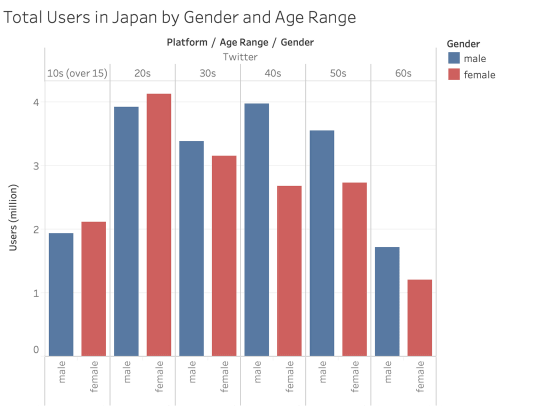 ◆ Facebook user demographics
Facebook has become a 'social media for men in their 40s and 50s' in Japan. Due to the real name system and the extensive message function, it is likely that businessmen will often exchange Facebook accounts instead of exchanging business cards. On the other hand, it is expected that it will become 'middle-aged social media' in a few years due to the young people leaving Facebook. 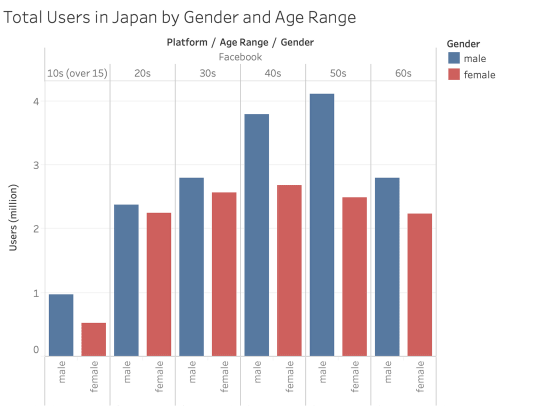 ◆ Instagram user demographics
Instagram is a social media widely used by women in their teens and 30s. On the other hand, it is also worth noting that the graph stands out only for men in their 40s. Instagram was once thought to be 'for women,' but it's also characterized by a gradual equalization of gender ratios. 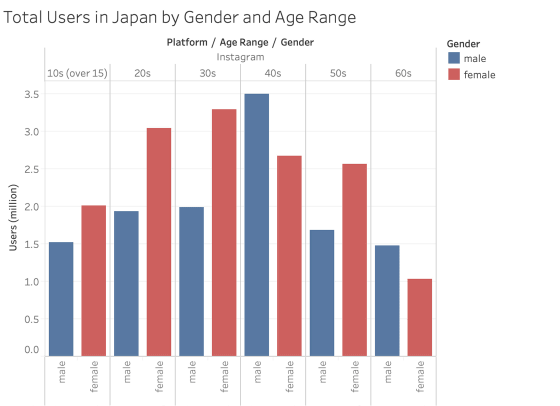 ◆ Demographics of TikTok users
It is TikTok that makes a big difference depending on the age. TikTok has many male users in their teens to 30s, and many female users are young. On the other hand, for some reason, there is also a tendency for the graph of male users in their 40s to stand out. 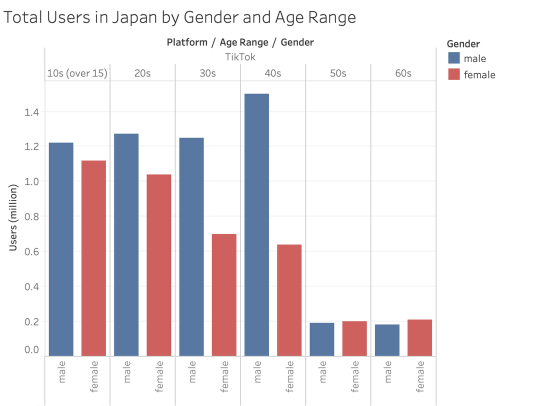 ◆ LinkedIn user demographics
LinkedIn, a business-specific SNS that is widely used in Europe and the United States, has not spread much in Japan. It is believed that this is because changing jobs is not as common in Japan as in other countries, and it is not necessary to publish your career online. Against this background, Japanese LinkedIn users are more likely to work for overseas companies or speak English. However, given the overwhelming majority of male users in their 20s and 30s, it is considered worth using for marketing purposes. 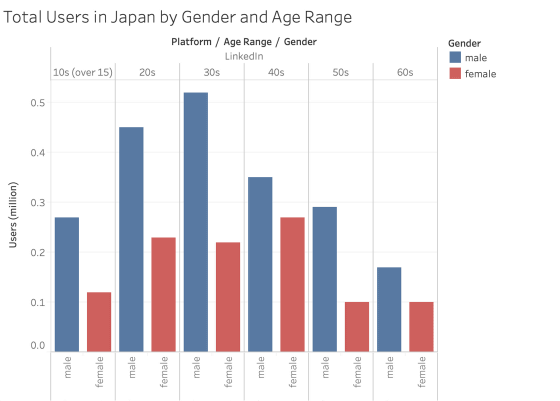